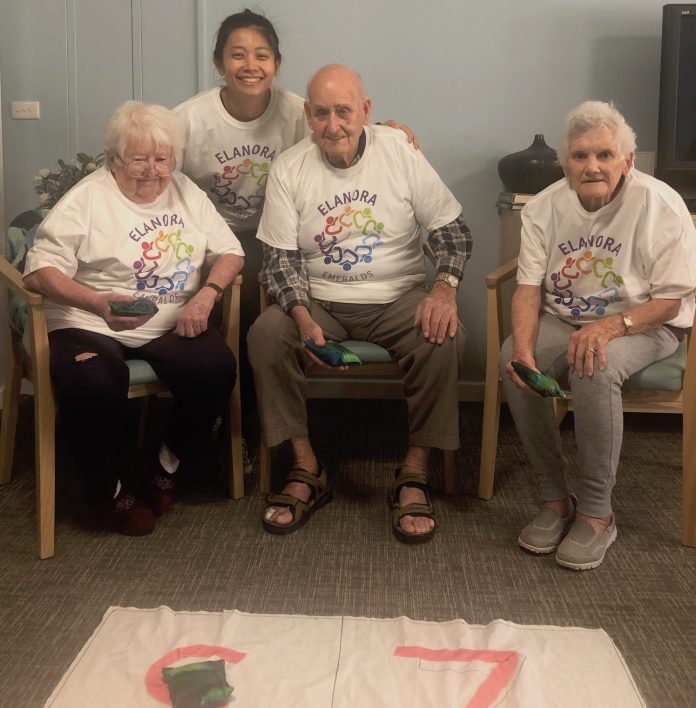 Bethanie, Western Australia’s most recognised not-for-profit aged care and retirement living provider is working hard to get their Elanora Emeralds in shape for this year’s annual LiveLighter Aged Care Games, taking place at the South West Sports Centre in Bunbury on 11 April.

According to the Seniors Recreation Council of WA (SRCWA), the LiveLighter Aged Care Games are set up to provide an opportunity for people in ‘care’ situations to experience team participation and light competition, as well as social interaction, through adapted games in a community recreation facility.

With the support of the Therapy team, Bethanie Elanora Physiotherapist Michelle Tong has been working with residents from the Bethanie Elanora Aged Care Home for the last six weeks to gear them up for the games.

Michelle says, “We now have a group of residents who join in as often as possible in our twice weekly training sessions, to prepare for the games.”

There are five games on the day which include seated hockey, seated pass ball, bean bag toss and skittles. In addition to the 10 residents who will participate, there are also five support staff who will attend and participate in a fifth and final game on behalf of the aged care home.

The training team varies in age range from 66 – 98 years old, each kitted out in an Elanora Emeralds t-shirt, specially made for the team.

Michelle adds, “We entered the games a few years ago but haven’t been back since now. It’s been a joy watching everyone train and get a good laugh out of it, a great way to combat feelings of social isolation, keeping residents active and connected to others, which has a huge effect on their overall mental and physical wellbeing.”

A perpetual trophy (Cup) and small replica plus Gold medals are awarded to the winners and Silver and Bronze medals awarded to the runners up & third place all other participants receive a participation medal. The LiveLighter Aged care Games have been conducted over the last ten years and since the games commenced in 2003, SRCWA has hosted 40 competitions with a total of 9000 people attending the games to June 2012.

A detailed look at the residential aged care sector across Australia

Being creative the order of the day for community-minded seniors