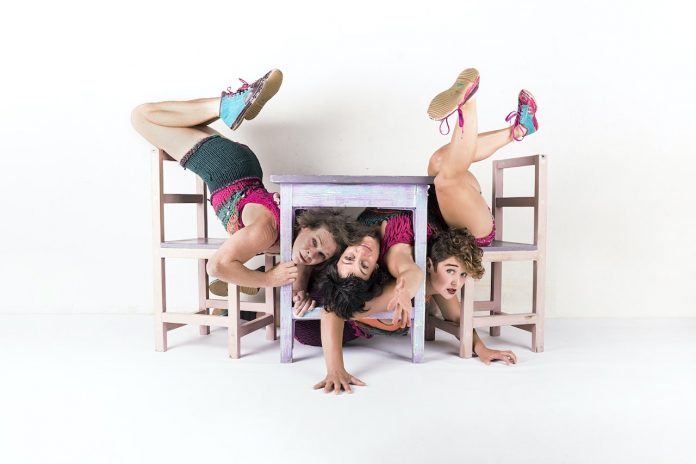 After an award winning season at Edinburgh Fringe, Casting Off is coming to Perth as part of the Fringe World 2020 season.

Casting Off is an all-women, cross-generational show that challenges the conventions of circus and subverts expectations.  As they cast off conformist stereotypes, three generations of dynamic women tumble, talk, fly and balance precariously in an absorbing performance where the personal is political, the furious is funny, and the acrobatics are downright dangerous.

Self-directed, hand-knitted, and honouring the life events that get in the way of work, Casting Off is a joyous accumulation of moments that shine a light on women relating to each other in playful, fruitful relationships.  It’s a disarming, hilarious show about living on the edge and talking about it.

The three extraordinary women at the heart of Casting Off are:

Debra Batton (59)  Debra toured extensively as an acrobat with Circus Oz, an  actor with Magpie Theatre and a dancer with Tracks Dance. She was Artistic director of Legs on the Wall for 10 years. More recently she was the Circus Director for the pre-school television series Hoopla Doopla, artist in residence at The Womens Circus, and Performance Teacher / Guest Director for the National Institute of Circus Arts (NICA). She also currently performs with Batton & Broadway and Such n Such.

Sharon Gruenert (42) has flown around and been thrown around for 20 years in the circus. She was an acrobat in Cirque du Soleil’s Saltimbanco and has performed with many of the iconic contemporary Australian circuses including Circus Oz, Circus Monoxide and Dislocate. One career highlight was performing on a trapeze hung from a hot air balloon 20m in the air as part of Canberra’s 100th birthday celebrations.

Spenser Inwood (30) trained, performed and toured with the Flying Fruit Fly Circus (FFFC) from the age of 8 to become the multi-skilled acrobat and aerialist she is today. She was assistant director and performer on the FFFC portion of the Commonwealth Games closing ceremony 2006 and was invited by The Womens Circus to direct What Do I Want in 2013. From 2013-2017 she was a member of the Circus Oz ensemble.