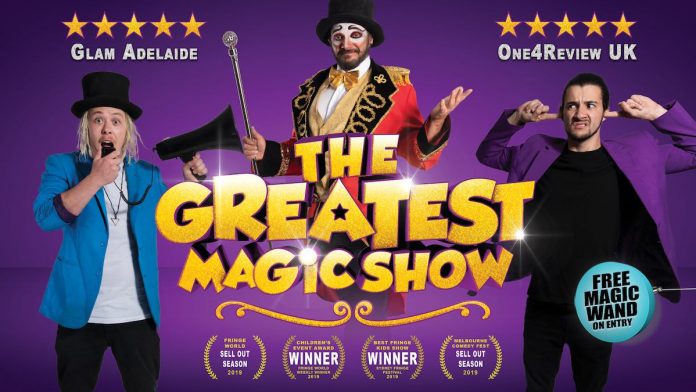 Following a COMPLETE SELL-OUT SEASON at their first ever Fringe World, SHOWMEN PRODUCTIONS are once again returning to Perth with The Greatest Magic Show  – bigger and better than ever before!  This multi award-winning magic show comes to Perth from sell-out shows at Melbourne’s Spiegeltent, Edinburgh Fringe Festival and most recently Sydney Fringe where they were awarded the 2019 Best in Fringe Kids at the festival!

After having debuted in 2018 to sell-out crowds across the country, the Showmen have continued their enormous success, being awarded the 2019 Best Children’s Show, Fringe World Weekly Award. In Adelaide, they received further acclaim from GLAM Adelaide, where they were hailed as: “Quite possibly the Penn & Teller of Australia! ★★★★★!”

This year at the fringe, THE GREATEST MAGIC SHOW stars Sam and Justin are bringing brand new magic, a crazy circus stunt that has to be seen to be believed; and a brand new character – The Ringmaster! Incredible illusions, circus artistry, and shooting an unsuspecting furry friend out of a cannon are just some of the things that make this family-friendly magic show the greatest. As an added bonus, every child who attends the show will receive a FREE MAGIC WAND on entry and have their chance to take a photo with the stars of the show after the performance!

“Full-on family entertainment from start to finish… with a poignant speech at the end encouraging all kids to follow there dreams! ★★★★★!”

Comic magicians Justin Williams and Sam Hume bring their combined 15 years in family entertainment to this magical show, which is anything but a typical children’s magic show. The routines from these charismatic performers are unique, hilarious and absolutely and out of this world.