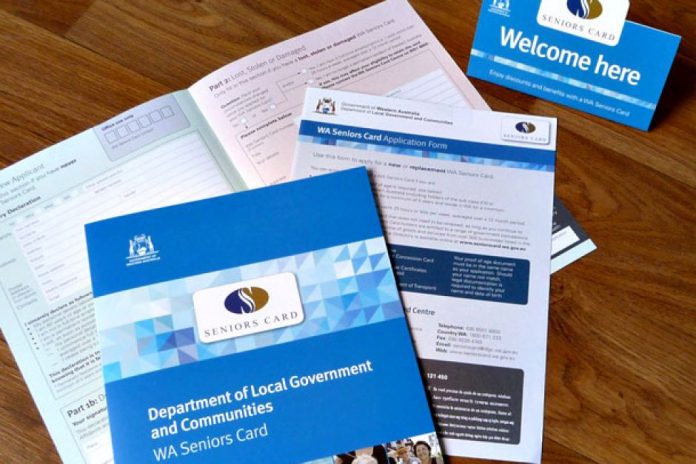 Reader Coleen Purcell wants to know why she is not eligible for a Seniors Card at 60.

“I am recognised as a senior by community standards, I don’t receive a pension as I have worked and saved hard to be a self-supporting retiree and I am no longer in the paid workforce, yet I am not eligible for a seniors card.

“Because I live in WA!

“Until fairly recently I would’ve qualified at 60 however some mysterious person/persons changed the laws and each year the qualifying age goes up one year. This means friends 63 years old have the card but I will keep chasing it each year until I turn 65.

“Other 60 year old plus seniors from other states however can come to WA and enjoy our Senior Card benefits if they brandish their own state seniors cards,” she said.

Have a Go News has tried to find some answers.

The Minister for Seniors office declined to reply saying the government was in caretaker mode due to the impending election.

Glen Mace, acting executive director State-Wide services of the Department of Communities said the decision to increase the eligible age for the WA Seniors Card was made by the previous government as part of the 2015-16 budget announcements.

“This decision was based on the projected increase in the number of seniors in Western Australia from 458,000 to 865,000 over the next 20 years.

“In order to sustain the current level of benefits to ensure the WA Seniors Card remains meaningful, the eligible age was increased.

“The WA Seniors Card provides members access to free off-peak travel on public transport and this offer is only matched by the Northern Territory and South Australian Governments. In New South Wales, Victoria and Queensland, Seniors Card members are only provided concession fares.

A spokesperson for The Greens MP Alison Xamon supported this, pointing out that some other subsidies were available in spite of the absence of a card.

The Liberal Party’s shadow minister for ageing, Kyran O’Donnell said: “I have no idea why we make ours 63 years when other states are 60.

“I will bring this up with our party to possibly have it changed to 60 and fall into line with other states. Under common sense it should be 60 and that is what I will be advocating for.”

The Barnett Government Liberal changed the age of eligibility in 2017 at the same time reducing seniors discount on local government rates.

While WA’s senior’s card is claimed to be the most generous, both Victoria, New South Wales and the ACT offer seniors stamp duty concession when downsizing which are worth much more.