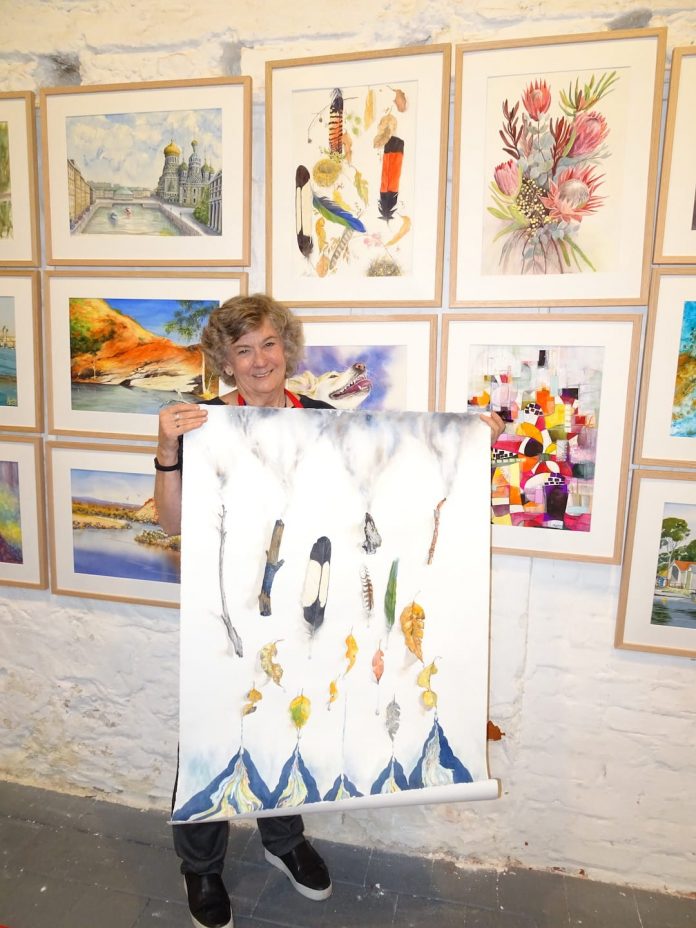 Professional watercolour artist Penny Maddison has lived and worked all over the world, but her biggest passion in life has always been painting nature. She likes nothing better than walking her dog near her home in Gooseberry Hill and seeking inspiration for her work from her surrounds.

Penny has been taking part in The Watercolour Society of WA’s second International Watercolour Exhibition at the Moores Building in Fremantle. The exhibition attracted 147 works from about 15 water colour societies from around the world and across Australia.

She took first prize in the Watercolour Society of WA’s inaugural portrait prize in 2021. Animals and birds are a main source of her subject matter together with landscapes and architectural subjects, portraits and still lifes.

Her work in the exhibition depicts a series of beautifully coloured bird feathers and nests titled Bush
Gems and another similar large painting titled Nature’s Tears, a tribute to the devastating bushfires which struck the eastern states a few years ago.

“For every object in the work I created shadows as I progressed,” Penny said. “When I’m walking my Chihuahua cross Biscuit in the park, I look out for items to inspire my painting such as hare orchids which will be blooming soon.

“I paint every chance I can, working from my rammed earth studio, it’s rather like a religion. You only become good at painting by putting in the brush miles.”

Penny was born in Borneo but her mother came from Perth so when the family returned they settled in Darlington and Penny grew up in the area (“I’ve always been a Hills girl”). She attended the local primary school and Perth College before training as an interior designer at Perth Technical College (Now TAFE).

“Looking back my early training taught me drawing skills, I’ve had a pencil in my hand for decades,” Penny said. “I tend to think drawing is a universal language; if you are lost somewhere and don’t speak the language you can draw what you want to say.”

Early on, Penny worked in Perth drawing at architectural offices, then headed to the UK, hitchhiking around Europe. Back in Perth she worked again in drawing offices but the travel bug bit again and she headed for London, only getting as far as South Africa, where she met her future husband John and settled there.

The couple had three of their four daughters in South Africa and Penny revelled in the beauty of the country’s nature and geology, photographing and painting its wildlife and nature as a member of the Watercolour Society of South Africa. But the political situation decided the family to return to WA 20 years ago.

Penny, who has works in collections in the United States, Canada, the UK, France, Germany, Holland, Japan, New Zealand Italy, China and South Africa, has held four solo exhibitions in WA and is planning a fifth.

Among her many awards and events, she attended and exhibited at the International Watercolour Exhibition in Maccagno, Italy in April 2013. In July 2015 she took part in a cultural exchange and shared exhibition at Huizhou Culture Museum in Huang Shan City in China.

“For the current Fremantle exhibition, I did the display layout for the paintings on my computer. We received them rolled up, by mail, from various countries and photographed them. A group of society members framed them all in identical frames made for us by a local framer in Maylands. It was quite a big job.

“Painting has saved my life, it is a meditation, it wouldn’t be worth getting out of bed in the morning without my art. Painting in watercolour is good for the brain, it makes you think.”