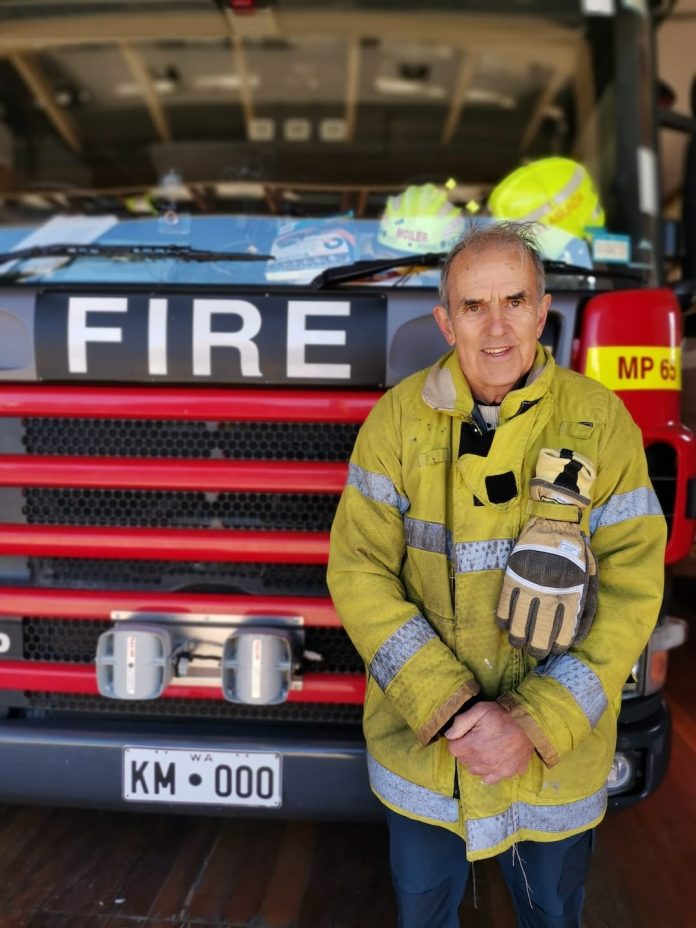 While it’s not the kind of Christmas present most would wish for, firefighter Alan Pugh believes that by the time the festive season comes around he’ll have attended 5000 incidents, making him Kalamunda Volunteer Fire and Rescue Service’s (VFRS), most active firefighter in its history.

At the age of 77, and after 47 years of volunteering Alan, reckons he has plenty more to offer the community and has no intention of hanging up his boots just yet.

The recipient of a 2022 Australian Fire Service Medal in the recent Queen’s Birthday Honours List, Alan was a brigade captain for eight years and has been the officer-in-charge at more than 1,000 incidents.

Alan joined the brigade in October 1974 and says he has seen some major changes since then.

“We had an open-back Bedford truck that had few creature comforts and a little bit of equipment on it, but over the years we’ve got to where we are now. We have the same gear on our trucks as the career guys do.

“The equipment we have has increased out of sight and that of course means the training has had to increase so we know what we’re doing.”

He still holds his breathing apparatus qualification and can be counted on to be at the front of the line during any incident.

The recently retired engineer arrived in Australia from the UK in 1971, with his wife Angela and was looking for a way to make friends.

He thought becoming a volunteer firefighter could help the two of them develop a social circle in WA.

Alan says the plan was to join for a couple of months to make some friends – and he’s still there.

“It’s got something going for it,” he laughs.

In early June Alan had 80 callouts to go to reach 5000 and doesn’t think his age should be an impediment to him getting there.

Putting a blanket age limit on fire-fighting volunteers would be a dangerous thing, he says.

“In some of the country areas you are lucky to get anybody, let alone an old fellow, so that wouldn’t apply.

“I think it’s got to be about fitness level and ability to do the job and as long as I’m fit enough to do the job I expect to stay there.”

Alan belongs to Fire and Rescue which is primarily involved in dealing with incidents in the town.

While he thinks there has been an increase in fire threats in out-lying areas it hasn’t affected his brigade so much.

“Our risk in a way has reduced because with the amount of infill housing now coming on, there are very few big areas of bush in our area, although the bushies outside our area have seen some pretty big fires.”

“Traffic accidents, particularly where kids are involved, are nasty,” he says.

Alan worked as an engineer for what is now Chevron.

Alan says juggling volunteering and work wasn’t too difficult, with the people who paid his salary getting priority.

“I had a family to keep and a mortgage to pay and working in Perth was an impediment, but eventually I moved to Kewdale and the company was very supportive.

“If there was a daytime callout and the pagers went off, I would just go and when the fire was out, I’d go back to work.”

Alan says his volunteering was certainly time consuming and even now he’s spending 25 to 30 hours a week with the brigade.

“When I was a captain, it was almost a full-time job.

“Our current captain is the same. He works for Telstra, but he works from home, partly so he can attend the station and fires.

“The station is being rebuilt so he’s almost living there.

“It’s one of those organisations that will soak up as much time as you are silly enough to donate.”

Alan says his time with the brigade has been incredibly rewarding.

“I’m not going to claim that I’m doing it to support my community, it’s nice that it works out that way, but I do it because I enjoy it. If I didn’t enjoy it, community or not, I wouldn’t be doing it.”

Alan has played a key role in brigade recruitment and many community-minded initiatives, such as involving the brigade in the local Blue Light Disco for youth, fire safety and awareness for schools and seniors, establishing resident support groups and encouraging fire readiness in Kalamunda and the surrounding community.

He has also been a zone representative and executive member of the Western Australia Volunteer Fire Brigade Association.

While Alan says volunteers don’t join organisations for the recognition: “it is bloody nice when it comes,” he says.