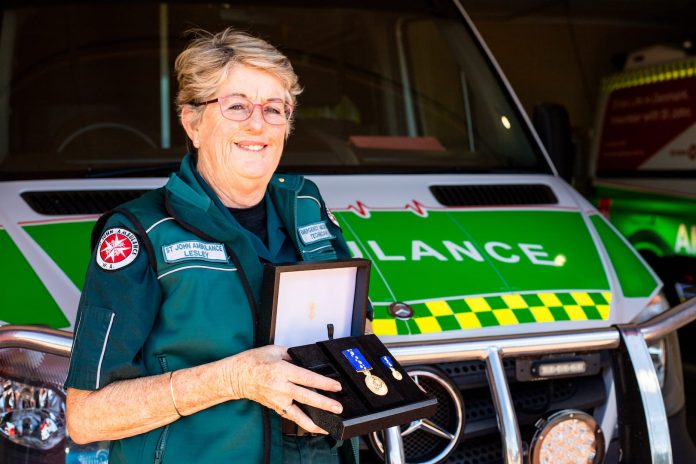 When Lesley Murphy stepped up to volunteer for Muscular Dystrophy WA (MDWA) more than two decades ago, her reasons for doing so were highly personal and very close to home.

She was also highly motivated and hoped she could be useful. But what Lesley never expected was that it would lead to her becoming one of this year’s recipients of the Order of Australian Medal (OAM).

“My youngest son, Conor, was diagnosed with a rare form of muscular dystrophy known as Duchenne disease, when he was three and a half years old,” Lesley says.

“At that time MDWA was predominantly a research-based organisation so they didn’t have the capacity to provide the much-needed support for patients and their families.”

Lesley quickly became heavily involved with MDWA to help fix this situation and joined the Board which put her in a better position to instigate change. And change things she certainly did. Despite very little funding and limited support, Lesley created a community support program, which has grown into a highly valued and extensive service. She then volunteered four days a week to run this vital MDWA program.

As an ex-nurse, and with her own first-hand experience with MD, Lesley could also see that there were certain medical issues that needed addressing.

Many patients with MD suffer from weak breathing muscles, hence an inability to cough, so they are highly prone to developing pneumonia and bronchitis which can be catastrophic, even fatal.

Lesley was instrumental in conducting research and raising funds to purchase cough machines that could be lent to patients. The success of Lesley’s work has led to more than 40 cough machines being made available to patients all across WA. Better still, there is now a national cough machine program with NDIS funding.

With patient outcomes being one of the best indicators of success and with these machines being available for home use, MDWA has reported a significant reduction in the incidence of hospital and ICU admissions, emergency department presentations, chest infections and visits to doctors.

But Lesley still had more on her To Do List.

“As Duchenne is a rare disease, I began focussing on advocating for a national rare disease plan. There are a lot of rare diseases that receive little to no funding for the medications needed by patients. Raising awareness is also vital to getting coordinated strategies and public health policies for treatment of these lesser known diseases.”

To achieve this Lesley helped establish Rare Voices Australia, a not-for-profit organisation to advocate, support and connect people with rare diseases with other support networks located nationally and internationally. Not only was Lesley the secretary of Rare Voices Australia but she also contributed to the Federal Government’s National Health & Research Council by sharing her community insight, knowledge and experience.

She was also a guest speaker at the first ‘Awakening Australia to Rare Disease International Symposium’ held in Fremantle in 2011.

With Lesley’s son Conor sadly dying in 2014 when he was just 25, Lesley has since stepped away from this part of her volunteer work. She also found that being a hard working advocate can take its toll; when she turned 60 she realised she was severely burnt out and needed a break.

Lesley and her husband then turned their attention to building a holiday house in the Great Southern and she started splitting her time between city and country living. With more time on her hands and feeling more refreshed, Lesley again found herself wanting to volunteer and is now an ‘ambo’ with her regional St John’s branch.

“Volunteering is a great way to meet people and become part of a community. I just love it. I definitely believe you get more out than you put in when you become a volunteer.”

Barbara is a community pillar who loves life and meeting people