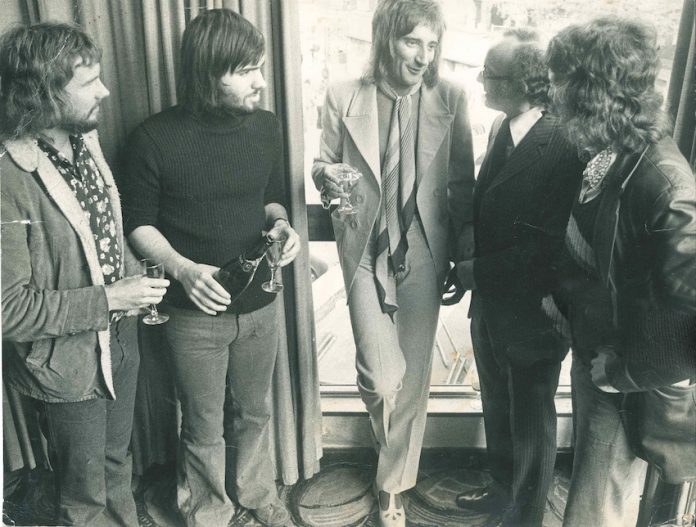 After a career reporting for newspapers and magazines around Australia and overseas, Lee Tate opens his files and notebooks in this three-part series. Lee spells out the issues, names names and, in part three, lists his 50 top West Aussies.

Pardon the namedropping! It’s rather unavoidable when your profession is stalking newsmakers. Here is a selection.

In an unbelievable chance meeting, Roy Orbison was sitting alone in a Pommy pub in Stratford-Upon-Avon, pouring cream and shoveling sugar into his coﬀee.

When I introduced myself as a reporter on the local newspaper (for six weeks), Roy volunteered that he was getting work done on a new sports car, gifted to him by his father-in-law for use when touring Britain.

Roy then led me and my photographer to a suburban shed where a mechanic had the car’s engine up on the bench, with the engine’s head being shaved to make it faster.

By just three miles an hour.

Roy happily agreed to a photo before we headed back with our little scoop for the Stratford-Upon-Avon Herald.

Wearing a canary-yellow jumpsuit with yellow slippers, Rod Stewart turned up late for a function hosted by my then employer, music magazine Melody Maker, at London’s famous Oval.

Joining our little group of four, the star apologised profusely for being late.

I said waiter service had just finished but the singer wasn’t refused when he called for a bottle of champagne and invited us to help ourselves.

But not him. He wasn’t drinking.

During a long election campaign, the Prime Minister, with media, attended Hobart’s casino for a VIP knees-up night of entertainment.

But as soon as the lights went down, Fraser stood up, followed by his bodyguard, and slipped out of the casino via the kitchen, startling chefs.

He was oﬀ to bed after a long day’s campaigning.

We media chooks stayed for the show.

On the day Gough went to the polls for the first time, I joined him and Margaret at their Sydney apartment.

He’d forgotten the arrangement but told me and the Melbourne Herald photographer to come in.“Where do you live?” Gough asked us. “I live in your electorate,” said the photographer.

Gough suddenly thrust his arm around the snapper, ushered him in and boomed:“Come in, dear boy. Come in”, theatrically turning his nose up at me over his shoulder for not being in his electorate.

Then Gough asked Margaret: “Which tie today? The red or the blue?”

In Melbourne I went with ACTU advocate Hawke to a Carlton eatery, a regular haunt for unionists.

The proprietor held up a chalk board menu featuring “Hawke barramundi”.

Bob roared with laughter and thumped the grinning proprietor on the back.

I waited for the Prime Minister on the tarmac in Melbourne to get a response for a story.

Howard saw me and walked right up to me and asked: “What is it?”

I said I needed a response to a breaking story.

He said: “Cripes! I thought you were a federal policeman”.

Clinton’s charisma is staggering. I met the ex-president before his speech at Burswood.

After his long and impressive talk, dinner and a long night, Clinton walked a very long line of locals waiting to shake his hand.

Clinton slowly worked the long line, looking into the eyes and speaking to every person, answering all their questions and casually taking his time.

After his speech, hosts Barbagallo’s presented Clinton with a box of Cuban cigars.

Surely, he appreciated the irony, given the Monica-cigar scandal.

I was assigned by The Australian newspaper to attend Princess Anne’s dinner dance at Victoria’s Government House.

But being so close to our night’s deadline the news editor directed: “Only file a story if Anne gets screwed on the dance floor”.

There was, you will understand, no story.

In London’s Swiss Cottage on a Sunday morning, I came face-to-face with Elizabeth Taylor in a supermarket.

I just didn’t know it at the time.

I noted a resemblance when she virtually walked into me.

It wasn’t until years later when I read that Taylor had strikingly violet-coloured eyes that it meant something because this woman certainly did.

To satisfy my curiosity, 40 years later I Googled Taylor’s 1971 there she was in the Pommy papers, photographed with Richard Burton, headed for his holiday bolt-hole.

It was around the corner from the supermarket.

But a Melbourne Herald photographer and I just missed him.

However, we could see his jet on the tarmac and wandered over for an inspection, expecting to be stopped anytime.

We got right up to the steps unchallenged and stepped inside the plane.

We noted the sumptuous fit-out for a possible story then headed back to our car.

Driving oﬀ, we saw a man running after us, writing down, we presumed, our number plate.

We never heard another thing.

Later, Sinatra called Australia’s female journalists “buck-and-a- half hookers” and his plane, grounded by unions, stayed on the tarmac for a few more days than the superstar intended.

When, acting on a hunch, I found Ledger in Burswood’s swimming pool, he was passionately kissing Heather Graham.

He saw me and Sunday Times photographer Alf Sorbello and leapt from the pool.

Dripping-wet and rippling with muscles, was at his angry best.

“Could we get just one photo?” I asked.

But Sorbello thankfully shot a photo over his shoulder and we scored a picture of Heath and Heather for my column (and distribution around-the-world).

From her mansion, Rose drove me up the street to show oﬀ her shiny new BMW – a gift from Willie.

She also brought her three poodles, with one nipping at me the whole way. (Not sure if it was Denis, Lulu or Snoopy).

Rose said she was planning to drive across the Nullarbor with the Porteous pampered pet poodles perched on the back seat.

Rose said:“I’ll drive behind Willie. He’s got a car the same”.

The legend materialised unannounced in the Melbourne oﬃce of The Australian with a manager.

He walked out the other side and was gone without a word to us. Staﬀ had complained about cramped conditions.

Rupert simply said: “Rubbish” and the matter was dropped.

A few of us journos flanked Greg and Laura Norman when they inspected their superyacht being built in Henderson.

Laura told me she was excited at the chance to sail around Australia with Greg and the kids.

I suggested that with all of the golfer’s commitments, they might be lucky to get a lot of use out of the monstrous superyacht.

The boat was sold. 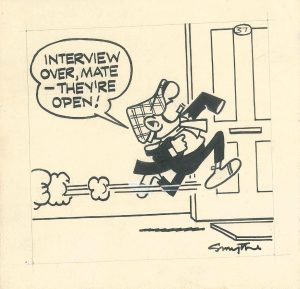 A delight to interview in London, the British cartoonist created ‘Andy Capp’ comic strip for 40 years in newspapers around the world.

After our interview, Reg whipped-up an Andy Capp cartoon for me with the little character saying: “Interview over”.

He was headed for the pub.

Where opinions matter – it’s time to get serious about eating