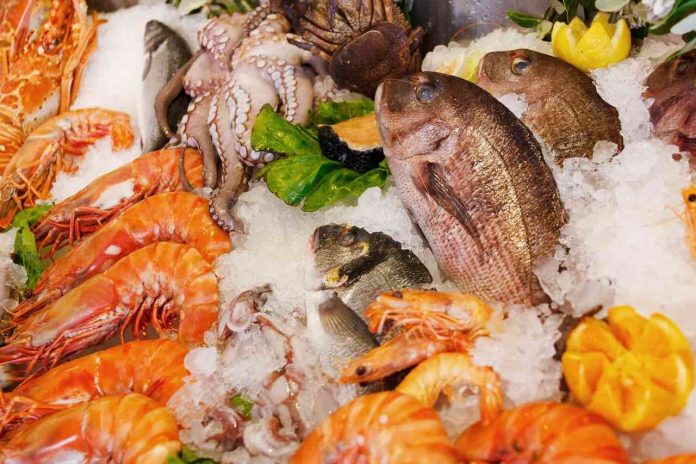 The Department of Health is advising people not to eat fish, crabs or shellfish collected from within Mindarie Marina after recent testing confirmed potentially toxic microscopic algae at highly elevated levels.

“These algae, which are not visible to the naked eye, can produce a very potent neurotoxin which could be absorbed by filter feeding shellfish and potentially consumed by crabs and fish to a lesser extent. Normal cooking processes will not destroy these toxins.

In the worst case scenario, PSP may cause muscular paralysis in people who consume affected shellfish, crabs or fish from the Marina,” Mr Theobald said.

People who consume wild shellfish, crabs or fish collected from the Mindarie Marina may also experience symptoms including tingling or numbness of the lips, prickliness of the fingertips and toes, nausea or vomiting, impaired balance, dizziness, slurred speech, double vision, weakness, difficulty in swallowing or breathing, loss of fluids and diarrhoea,” he said.

“Anyone who has consumed shellfish, crabs or fish collected from the marina and experiences any of these symptoms should seek urgent medical attention, particularly if they feel any respiratory distress.  Do not discard uneaten portions of mussels or other shellfish.

As a general rule people should avoid eating wild shellfish collected recreationally as their safety cannot be guaranteed. This is particularly the case for rivers, estuaries or other waterways where there is an increased likelihood of contaminant or nutrient inputs that in turn can lead to increased microscopic algae growth.

Mr Theobald said farmed shellfish purchased in supermarkets and other commercial outlets in WA are not affected as there is a strict quality-assurance program to ensure they are safe for human consumption.

“Other recreational activities including swimming and boating are not affected by this species of microscopic algae.”

Not all waterways are always monitored for algal blooms and anyone who sees or suspects an algal bloom in a waterway, should report this to the Department of Water and Environmental Regulations’ ALGALWATCH during office hours on 6250 8064 or to the local government authority for assessment.

The Mindarie Marina and City of Wanneroo will continue to monitor algae levels and provide advice to the Department of Health.

A touch of Maggie Beer magic for SwanCare meals