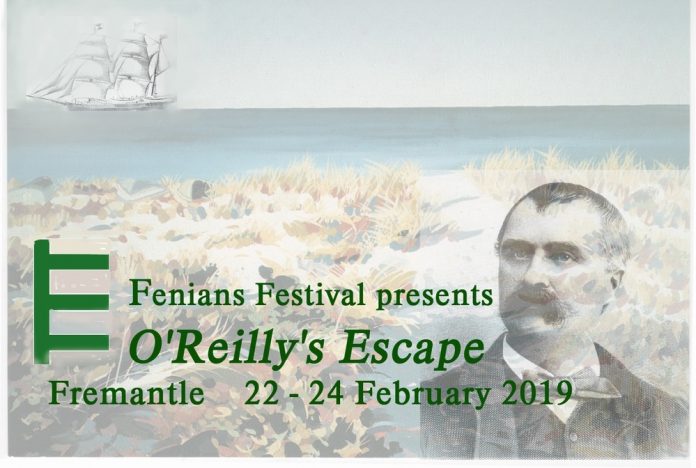 The Fenians Festival is back with a three-day program of music, literature, film and Irish dancing to commemorate the life and works of Fenian prisoner, writer and journalist John Boyle O’Reilly. O’Reilly landed in Fremantle in 1868 aboard The Hougoumont, the last convict ship to Australia and escaped in 1869 aboard the whaling shipGazelle which transported him to the USA. There he was one of the instigators of the famous Catalpa Escape, the daring rescue of the remaining Fenian prisoners in Fremantle Prison.

On Saturday 23 February the free Fenians Festival Family Day at the WA Maritime Museum returns for the second time. From 9am to 5pm children can follow the Shamrock Trail, view family films, watch a performance of Irish dancers and listen to stories of daring escapes. Tickets for both events available at eventbrite.com.au

Everyone is welcome to attend the traditional Irish Céilí on the Quay to be held at B Shed this is another free family-focused event open to all from 5.30pm. It will be followed by a traditional Irish music session nearby.

An exciting new all-day event takes to the streets of Fremantle on Sunday 24 February – The Moondyne Walk. This inaugural event is a reading of the entire novel written by John Boyle O’Reilly about Western Australia and published in Boston in 1878 as a serial in the Boston Pilot, and as a novel Moondyne: a study from the Underworld in New York in 1879. This is possibly the very first novel ever written about WA and presents a penetrating view of colonial life, Aboriginal culture and the power structure in operation at the time. The entire book will be read in public over 12 hours at various historic locations throughout Fremantle.  A special sit-down session featuring celebrity readers, All About O’Reilly, and revealing how he got here, how he escaped and the legacy he left behind will take place from 1.30pm to 3.30pm at The Orient Hotel. Doors open 1pm, drinks and food available, ticket details and readers announced soon.

The final public reading of Moondyne will take place during Gaelic Gumbo, anoutdoor concert on the front lawn of Kidogo Arthouse at Bathers Beach at approximately 7.20pm. One of the biggest hits of the 2018 Festival, Lucky Oceans and his band featuring members of the Zydecats blend their foot-tapping Louisiana beats with spirited Irish music from Fiona Rea and Tommy O’Brien. The show goes from 6.30pm to 9pm. Bring a picnic or grab a bite nearby and a drink from Kidogo’s Kelp bar. Tickets on-sale now at eventbrite.com.au.

Festival goers can also take the opportunity to visit St Teresa’s Library at the University of Notre Dame to view a rare collection of historical books either by or about John Boyle O’Reilly. Most were published in Boston in the late 1800s and include his poetry, speeches, a first edition of Moondyne and the obituary readings from his funeral published by the City of Boston.

Chairperson of the Fenians Festival Margo O’Byrne said, “This Festival gives us the time to pause and commemorate a great man. John Boyle O’Reilly’s writings inspire us, but it’s his resilience and ‘never give up’ attitude, and his care for fellow Fenians that is as relevant today as it was 150 years ago. In the face of exile and despair, he wrote poetry. When moved to the south west he keenly observed and collected local plants, learned from Aboriginal culture how to survive in the bush and argued with his guards to successfully save a Jarrah tree. His humanitarian work in the USA is well known. His fight for Irish freedom is renowned. Now it’s time to shine more light on his year in Western Australia and celebrate his achievement.”
More information: www.feniansfestival.com.au  or  www.facebook.com/feniansfestival

A celebration of song to be held in historic Guildford