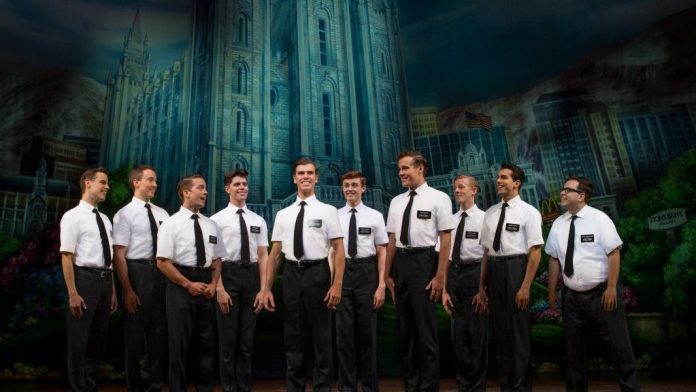 The Book of Mormon today announced a ticket lottery, in which a limited number of $30 tickets will be sold by ballot before each performance at the Crown Theatre, Perth.

The lottery will commence from the preview on Tuesday 3 September at 7:30pm.

Entries will only be accepted in person, on the form provided, at the box office beginning two and a half hours prior to each performance. Two hours before curtain, names will be drawn at random for a limited number of tickets priced at $30 each. Only one entry is allowed per person for a maximum of two tickets. Entries are checked for duplication prior to drawing. Winners must be present at the time of the ballot and show valid ID to purchase tickets. Tickets are subject to availability.

The Book of Mormon has notched up 968 Australian performances since opening at Melbourne’s Princess Theatre in January 2017 for a one year run, before moving to the Sydney Lyric Theatre from February 2018 where it played for a further year. Then followed a three-month sold out Brisbane season and The Book of Mormon has just closed at the Festival Theatre, Adelaide.

Winner of nine Tony Awards including Best Musical, the Grammy for Best Musical Theatre album and four Olivier Awards including Best New Musical, The Book of Mormonset a record for the highest grossing on-sale of any musical theatre production in Sydney’s history with more than 45,000 tickets sold by the end of the first day of public sales, and is the highest grossing musical in the Princess Theatre’s 159-year history in Melbourne.

At the 2017 Helpmann Awards, The Book of Mormon was crowned winner of the coveted Best Musical award, while Trey Parker and Casey Nicholaw were awarded Best Direction of a Musical.

Since making its world premiere in March 2011 at New York’s Eugene O’Neill Theatre, where it won nine Tony Awards, including Best Musical, The Book of Mormon has been performed on three continents and won over thirty international awards. The musical has smashed long-standing box office records in New York, London, Melbourne, Sydney and cities across the U.S.

The London production opened in February 2013, winning four Olivier Awards including Best New Musical, and breaking the record for the highest single day of sales in West End history. It has sold out every one of its performances to date at the Prince of Wales Theatre.

“The best musical of this century.” – Ben Brantley, The New York Times

The Book of Mormon is produced in Australia by Anne Garefino, Scott Rudin, Important Musicals and John Frost.