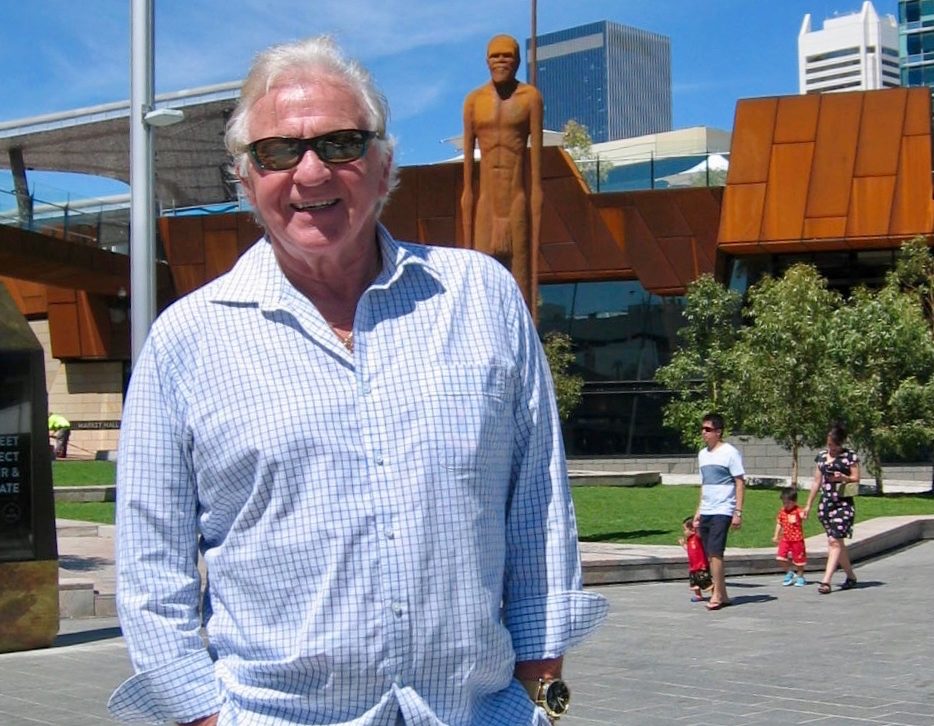 NORMIE Rowe, sitting in the sun at Yagan Square, is very much at home in Perth.

“I could have lived in Perth,” he tells me during our one and half-hour chat. “There’s a sense of community here that does not exist in other modern cities.”

Normie was born in Melbourne, moved to Sydney and settled on the Gold Coast, closer to entertainment opportunities.

He’s far from a stranger to Perth with innumerable performances and appearances here in his eventful lifetime including 15 Telethon appearances in a row. And he’ll be back on the fund-raiser again this year.

The good mates, who met in Perth aged 17 when Johnny hosted Club Seventeen, often appear together in sell-out concerts. They are preparing for a gig at Perth’s Friends restaurant.

Tanned and with a spring in his step, Normie, 71, says: “My voice has actually improved. It’s the best it’s ever been in my life.”

Normie has emerged as a true survivor from the wild sixties of rock’n’roll. Helpfully, he didn’t drink booze, didn’t womanise and cared for his voice.

“People sometimes turn up at concerts holding one of my early records, saying they’ve kept them longer than their marriages, sometimes several marriages,” he laughs.

Normie, a former church choir boy, stays up-to-date with the entertainment game. Always has. Well after he had been Australia’s most-popular singer and 20 years after his first singing lesson, Normie went back for lessons.

“At concerts in front of thousands of screaming kids, you can’t hear yourself sing. But when I came back from Vietnam and sang at Sydney clubs, I could hear myself and thought: ‘I’d better get lessons’.”

Normie always played acoustic guitar but has extended himself and now plays electric guitar. He also commands a working knowledge of modern technology, his computer and smart phone.

“I can’t stand technology if it’s not working properly,” he says.

Invariably when the curtain comes down on his shows, the star pitches-in to help load the band’s gear.

“They appreciate it,” he says.

Normie, who has a keen eye for a good script and turn-of-phrase, is not slow to polish his lines and sometimes collaborates on productions.

As well as his string of music hits, Normie has been a starring stage and television actor with roles in Sons
and Daughters, Les Misérables (acclaimed for his portrayal of Jean Valjean), in Evita, Chess and the musical, Cyrano de Bergerac, which he helped develop.

Australia’s heart-throb of the 1960s, Normie had 11 top-10 records in a row, starting with his first single, in 1965, an unlikely hit arrangement of Gershwin’s It Ain’t Necessarily So from Porgy and Bess.

Then his double-sided hit Que Sera Sera / Shakin’ All Over hit the airways.

“It exploded into number one and stayed there for 11 weeks,” smiled Normie.

In England Normie toured with of major acts including Sounds Incorporated, Gene Pitney, The Troggs, Julie Driscoll, Brian Auger and The Trinity, The Spencer Davis Group and Kiki Dee.

In the US, Normie supported by Roy Orbison and represented Australia at Expo ‘67 in Montreal.

Normie prospered over the decades but it didn’t make him rich.

“There’s not really a lot of money in it for most of us. I like to have the best conditions, quality venues, the best sound and good bands. It all comes out and it all costs money.”

Normie retains a manager, John Blanchfield (who had a hit, Son of a Simple Man, written by Perth export Brian Cadd).

“I’m not wealthy. That’s not important. Money isn’t the end of it,” says the legend, hopping-up to pay for our lunch.

Normie agrees that even for headline performers, there’s a long time ‘between drinks’ with spasmodic job offers.

“But I see this is a chosen career, not a job,” says Normie.

The leader of Normie’s band, The Playboys, drummer Graeme Trottman still backs Normie and is the only original band member.

Normie is a strong family man, staying in touch with his two daughters, their husbands and children and Normie’s son and his family.

He also meets regularly with ex-Army buddies and is a member of the Vietnam Veterans’ Association.

Normie was conscripted to Vietnam in 1969, became crew commander of an armoured personnel carrier and served with distinction. After returning, he worked extensively on behalf of other Vietnam veterans.

Awarded an AM, Normie became a strong charity supporter, especially for children. A long-serving member of Variety Clubs of Australia, he became their national ambassador, winning their ‘Heart and Soul of Variety’ award.

Normie is remembered for a sensational TV incident in 1991. On the Midday show, hosted by Ray Martin, broadcaster Ron Casey made remarks about Normie’s service in Vietnam and punched Normie.

There was some pushing and shoving during the debate but in 1998, they joined in a TV commercial for Bushell’s tea, taking the mickey out of their clash. Water under the bridge.

Normie, with his generous head of swept-back hair and trademark smile, is ready for life as it unfolds.

“One thing I’ve learned is to be ready for opportunities. In our business, that’s pretty much all you can do,” says the thrice-wed entertainer.

Normie loves the warmth. At home he’s mostly found in Queensland’s dress uniform of t-shirts, shorts and thongs. His girlfriend of the past few years, a consultant chef, visits from Byron Bay.

Once a week he joins ex-Army friends on the Gold Coast for a bite and a chat.

“Mostly, we talk about funny things but there’ll be sad times when someone has passed  away and we’ll remember him as he was.

“Life is good, generally, I think. It is what you make it. I took my kids to hear a motivational speaker and I took notice when he said life is not about the cards you are dealt but how you play your hand.

“I always bear that in mind,” says Normie, having endured the tragic traffic accident death of his son, Adam, 8, in 1979, followed by his marriage break-up and then ugly anti-Vietnam sentiment.

“I’ve had a great life, so far. I think there’s a percentage of my life left,” he grins.