The Ord River cruise is a challenge to the best photographers and the greatest writers. Few have done it full justice. Many have tried.

We set out from our accommodation in Kununurra, collected by tour coach and, despite having heard the greatest accolades for this part of the world, are staggered at the spectacular range of sights on this day’s outing.

Beneath one of the world’s greatest dry-construction freshwater dams, just rock-upon-rock, our purpose-built, locally-made cruise boat is waiting with three V8 outboard motors gurgling to go.

This is not only a gentle meander along a tropical, winding river but also an exhilarating joy ride at up to 60kms an hour skimming over shallow sections of a 55km-long journey through a luscious wildlife sanctuary.

The boat stops so we can sight fruit bats, birds of prey, exotic plants, rock wallabies and crocodiles sunning themselves along the river bank or swimming after prey.

If there’s time, you can swim in the Ord or in Lake Argyle, sharing it with 30,000 crocodiles. Being the freshwater variety, the ‘freshies’ aren’t interested in human flesh.

Occasional human-eating salties might make it into the area but rangers and tour operators quickly spot them, lay traps and move captives to less human-populated areas.

Paying $175 for seniors, $185 for adults and $145 for children, the 55 passengers left the Triple J Tours cruise gushing, beaming with satisfaction and shaking the cruise operator’s hand.

Cruise operators work-in with Indigenous leaders over areas to be visited, getting the best out of their adventures including, on our trip, a purpose-built stopover by the river bank with rock-formation views to go with home-made pumpkin scones, freshly-sliced fruit and carrot cake and hot and cold drinks.

Back on board, there’s an element of serious drama when an elderly passenger suffers an asthma attack. The captain calls over his radio. A car meets us on the river bank and the man is whisked to hospital.

The mighty Ord and lake provides birdwatching trips, fishing expeditions and dinghy and canoe hire on this greatest of human-made waterways that is so large it is deemed to be an inland sea.

Damming the Ord in 1972 for irrigated cultivation was no immediate success with crops and markets failing and freight costs being prohibitive. Today, the Ord’s supports a diverse range of agriculture plus hydro power, drinking water and water-related businesses and activities, especially the exploding tourism industry.

Diverting the river flooded important areas including the site of the pioneering Durack family’s station and home. The house has been dismantled, stone-by-stone, and reassembled a short distance from the dam and openned to tourists.

Further on, high on a hill, campers can enjoy one of Australia’s most spectacular views overlooking the beautiful, blue Lake Argyle from a sky-high swimming pool.

Then it is a short distance down to drive over the towering Ord River dam.

With its natural tropical beauty, pristine water, unique environment, wondrous wildlife and birdsong, the Ord River has to rank as high as anything we have seen anywhere on the globe.

Just when we were working out how we could put it all into words as we were leaving, Triple J boat cruise owner Jeff quipped: “You really have to see it in the wet.” 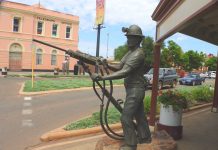 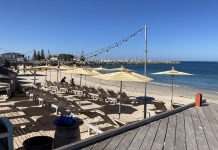