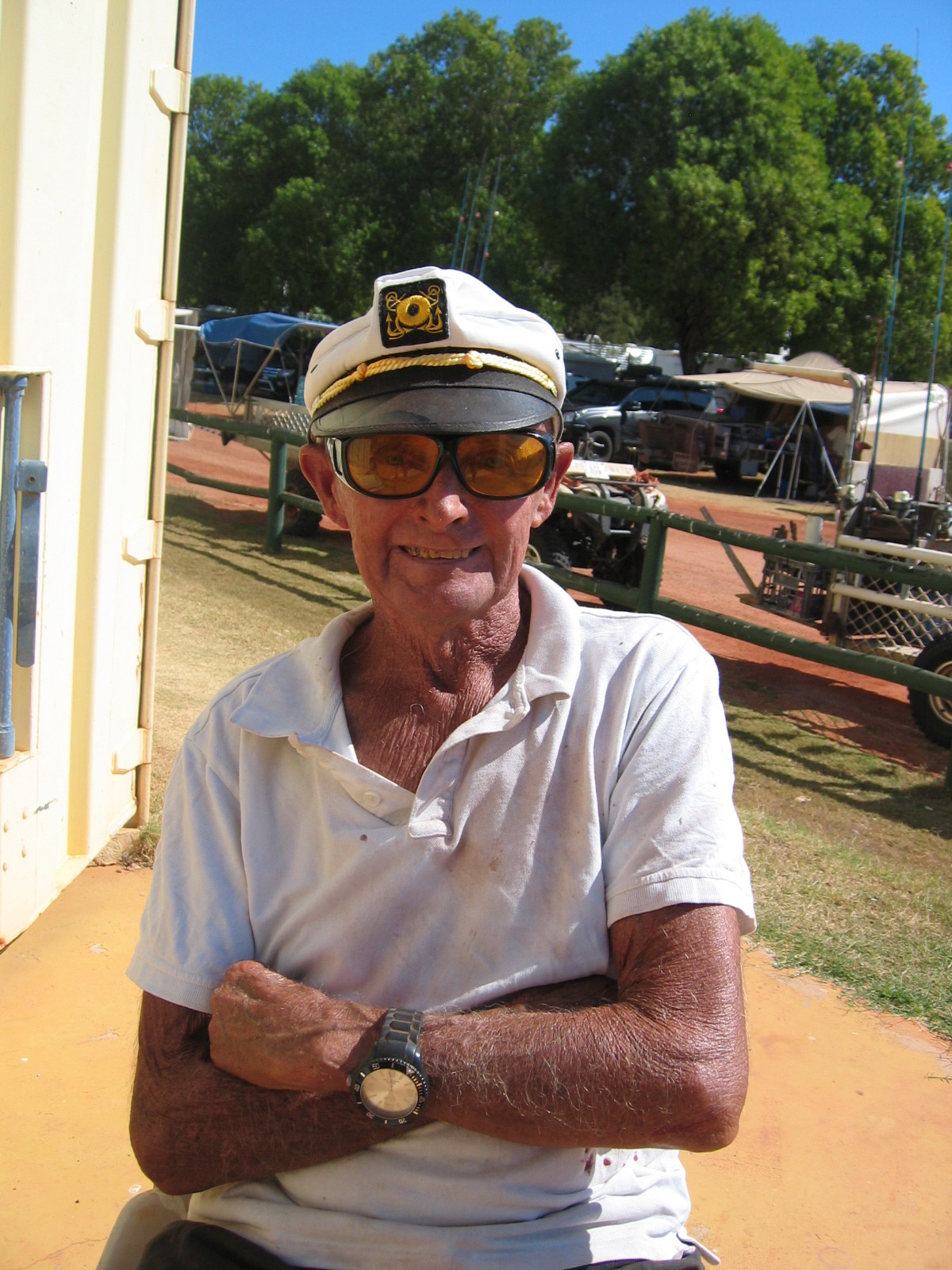 BILLY Moore, driving a quad bike he’s fashioned with parts from a local rubbish tip, hurtles along the hard-sand beach south of Broome, his eyes fixed out to sea watching for intruders.

Day or night, it’s part of a 30-year routine for Billy, a Coast Watch volunteer patrolling hundreds of kilometres from his self-made rustic home on the other side of the sand hills.

Billy lives in a couple of modified sea containers, linked by a cambered canvas roof, giving the impression of a small aircraft hangar, at 80 Mile Beach, 354 kms south of Broome. Bachelor Billy is 78.

Among the north-west’s most colourful characters, Billy lives a rough life, but he has all the creature comforts he desires. And the creatures.

“I just steer them away. They’re not coming to live with me,” he says.

There are kangaroos and wallabies, too, now separated by a wire fence across Billy’s back border.

Curious campers are bemused by Billy’s neat, novel abode with big flapping Aussie flags and his array of quirky quad bikes lined-up outside.

Billy might lend one of his quad bikes, fully loaded with beach fishing rods, plus a trailer fitted with discarded beach chairs, to a regular camper.

“The stuff people throw out, They come camping for the first time, don’t like it and dump their stuff,” says Billy in his trade-mark boat captain’s hat.

Billy has modelled his camp home of 40 years to his tastes. There was an indoor above-ground pool but it was removed to make way for a dance floor. Billy reckons it will add a bit of fun for backpackers. And him.

He’s installed an indoor spa where he sits to sip an ale.

Every couple of weeks Billy heads-out, hurtling over the bumpy, dusty road to the highway and 250kms into Port Hedland for supplies.

On his list are food, beer for his fridges and fuel for car and quad bikes which, for his patrols, he maintains and operates at his own expense.

“In the 1980s a bloke in a club in Port Hedland bought me a beer. Turns out he’s a customs officer. He asked if I’d be interested in voluntary coast watching because the government couldn’t afford more officers,” he said.

They sent a list of things to look out for: illegal immigrants, drugs, flora and fauna movements, contraband and illegal fishing.

Billy looks for boat movements, car tracks through the sand hills to the road and even footprints on the beach. They are all reported to Coast Watch.

Twenty-six illegal immigrants were once sighted just down the coast.

“I got a phone call from Ron the roo shooter,” says Billy.

“They had landed in a boat with a 16-year-old Indonesian captain. They were all rounded-up by authorities.” 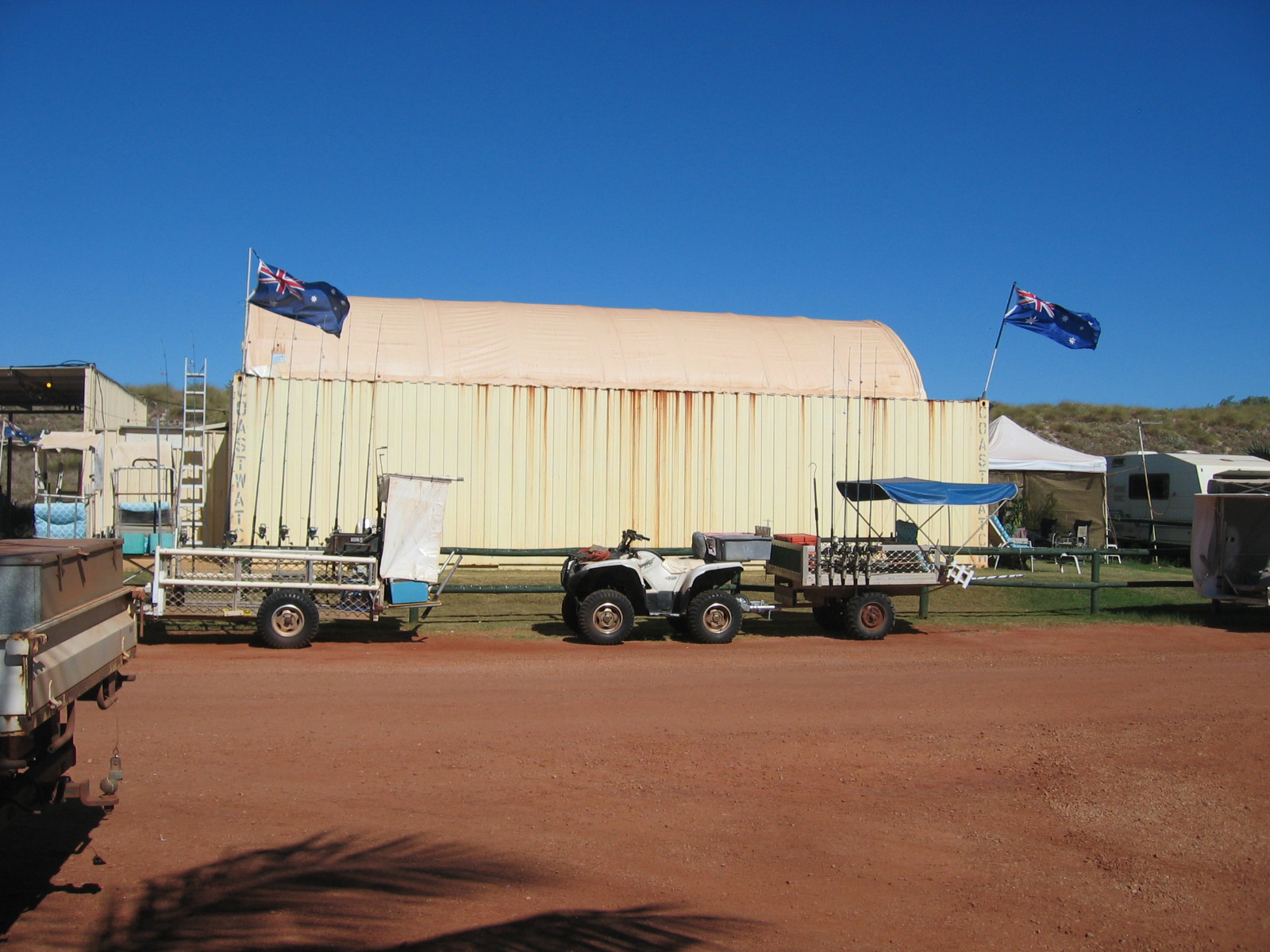 “Even a cyclone won’t blow them over,” he said.

“I watched it on television in Perth,” he laughs, having flown south to safety.

“The place gets flooded by cyclones but it all dries out.”

He said his family split after his grandparents gave their eight pubs to four of their eight kids.

“Four kids got two pubs each and the other four got none,” said Billy whose family missed out.

He set off to explore the world and in Australia worked to lay the foundations for rail tracks, developing an expert’s eye for surveying.

Later, Billy signed-on with a mining company in Port Hedland. On his time-off he towed a caravan to 80 Mile Beach and when he retired, became a permanent resident.

His regular task is precision-clipping all the caravan park’s border hedges.

“There are 21 hedges. So as soon as I’ve finished, I have to start on them again,” he laughs.

After Billy registered with a government-run voluntary clean-up your beach program, he went over 80 Mile Beach with a proverbial fine-tooth comb.

“The very next day, the program’s inspector arrived and I won best-kept beach in WA. I got a certificate for it,” he says.

Billy, who never married (“there just weren’t the women around where I worked”), believes in the good Christian life despite there being no churches for hundreds of kilometres.

“You don’t have to go to church to be a good person,” he said.

Hospitals aren’t handy either. But Billy, who has a Coke with his breakfast and his first beer before lunch, takes it with the territory.

“I had terrible back pain recently and Judy (his neighbouring resident) drove me to Port Hedland hospital. They couldn’t find a thing wrong,” he said.

“Laughter is the best medicine.”

Billy, sitting under a wall sign reading “Always Have a Plan B. Spare Beer in the Shed Fridge” cracks a third can of beer during our talk.

“My life is magnificent,” he says.

While living at the famous fishing beach, Billy is no fishing tragic.

“There’s a fine line between being a fisherman and standing on the beach looking like an idiot. When I wasn’t catching anything I went under water where people were fishing to see how the fish reacted and what bait appealed to them. I learnt a lot from that.

“But what am I going to do with a lot of fish? They are huge here,” he said.

Billy says he avoids taking anything too seriously.

“You have to be content with what you have. People feel they need something bigger and better every day.

“Just be good and be kind. But do it first,” says free-wheeling Billy.

Unique bush food dining experiences pop up around the state with...