HOLLYWOOD legend and superstar Debbie Reynolds was in Perth with her show Irene in 2008 when friends Peter Keogh and partner Sacha Mahboub, who had arranged her visit, took her to dinner.

“Debbie was so tiny, just up to my shoulder,” Peter recalls.

“Her contract said she must work nine to five hours but she went till midnight and never complained. She hopped into our tiny Mazda car and came to our house for dinner, went to a barbecue at a friend’s and saw the sights of Perth.

“You never stopped laughing when Debbie was around.”

It was Reynolds’ third Perth visit, she earlier took the Debbie Reynolds Show to big audiences at the Entertainment Centre in 1979 and also toured Australia in 2007 for John Frost and Peter and Sacha’s company Peach Productions.

Reynolds’ Perth visits were the highlight of an illustrious long theatrical career for the Mandurah couple, now in their 70s, who have been together 32 and a half years and married two years ago.

For Mount Barker born Keogh, his involvement with the Hollywood star over many years was the culmination of a boyhood crush which saw him write a three-page letter to her aged 11.

“I saw the Tammy movies and wrote a long letter to Debbie at MGM,” Keogh recalls.

“About six months later this three-page handwritten letter arrived from Hollywood from Debbie. I had told her about my stuttering speech problem and she gave warm and loving advice on what to do such as deep breathing and not to panic. She said she would catch up if she ever came to Australia.

“Many years later, in 1978, I had a note saying she was coming to Melbourne with the Debbie Reynolds Show and, in 2008, we brought her back with the musical Irene at His Majesty’s Theatre.

“The saddest time for myself and Sacha was when Debbie and daughter Carrie Fisher passed away within a few days of each other in 2016.”

It has been a sometimes sad but always optimistic life for the devoted couple whose love of the theatre has never waned. Mahboub, who runs Morning Melodies at the Mandurah Performing Arts Centre, is looking forward to the show resuming in October, November and December.

“I have been working there for around eight years, programming the show and finding artists. Patrons enjoy morning tea, there are lucky door prizes and we have a long and loyal following,” he said.

Mahboub was born in Cairns but his early life took a different turn when he ended up in an orphanage in Rockhampton.

As a ward of the state, he decided as a young adult to work on a cattle station for three years before ending up in Brisbane aged 21.

“I became involved in amateur theatre and then thought I would become a singer and dancer, heading for Sydney with £20 in my pocket. I auditioned for a show in the early 60s in Melbourne, The Great Waltz, with JC Williamson, then appeared in Funny Girl with Jill Perryman who is still a good friend.

“I did a lot of television and variety in nightclubs and theatre restaurants as a backup singer for Chelsea Brown, of American television’s Laugh-in. I was a big fan of, and dressed, ballet dancer Mikhail Baryshnikov, my idol when I was young when he appeared at His Majesty’s Theatre in Perth.”

Mahboub headed to Europe, returning to Australia in the mid 80s where he met Keogh. He was asked to do the wardrobe for the show Jerry’s Girls starring Jeannie Little, Judi Connelli, Lola Nixon, Marcia Hines, Debra Byrne and Big River with Cameron Daddo.

He went to London, returning to WA to produce cabaret for the old Friends restaurant in Mandurah, now Red Manna, featuring the likes of Julie Anthony, Todd McKenney, Jon English and Toni Lamond.

Keogh’s love of theatre started as a child, moving onto a job as an opera house tour guide. He went to Britain, fell in love and married entertainer Su Pollard, one of the stars of British television sitcom Hi-De-Hi!

They remained together for eight years, living a colourful and somewhat tumultuous life, travelling throughout Britain and Europe and making the show business pages of newspapers and magazines. Keogh wrote a book My Hi-De-High Life, before, during and after Su Pollard.

When the marriage ended, Keogh met and eventually married Sacha Mahboub and the pair settled in Mandurah. Life has come full circle but their love for each other and the theatre endures. 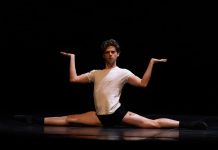 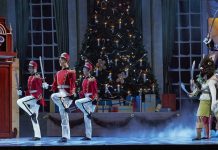