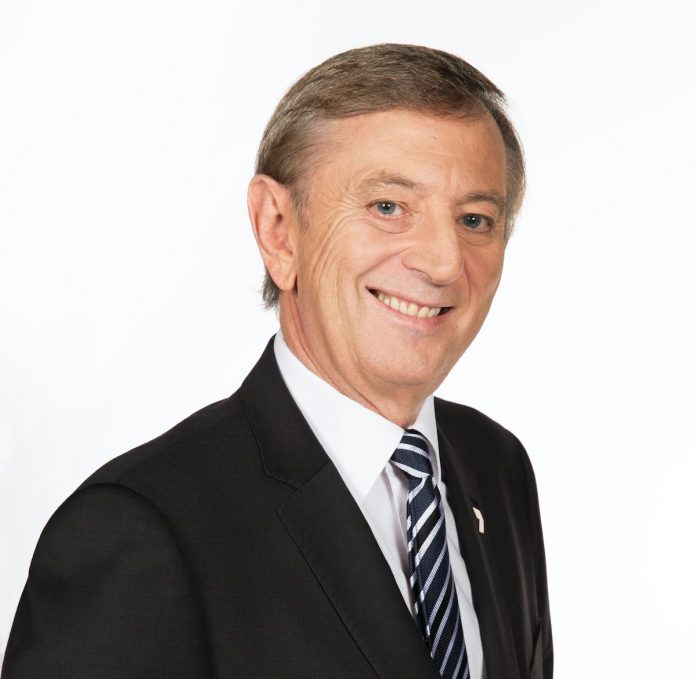 If Dennis Cometti doesn’t have the most recognised voice among Australian sporting commentators, he would certainly be in the Grand Final against any challenger for that honour.

For more than five decades Dennis spent weekends delivering every detail of performances from the world’s elite sporting people into lounge rooms across the country.

While his work also included Test cricket and Olympic Games coverage, his smooth and easily distinguishable recount of every kick, handball, mark and goal kicked by Australia’s footballers is what people most probably know him best for.

Some of the witty one-liners he delivered were often talked about as much as the football games.

Last month, and only a few years after ‘retiring’ from commentating, Dennis was inducted into the AFL Hall of Fame, joining many of those great footballers he cut his teeth talking about.

He became only the 11th member of the media to rise to the honour.

Dennis downplays his place on the list, believing it more befitting to those on the field. But he says he is honoured by the decision that he is celebrated alongside the greats of the game.

And if contribution to the game is a prerequisite to belonging in the Hall of Fame, Dennis’ place cannot be questioned.

“I was on the selection committee for the Hall of Fame for the AFL for quite a few years, so I understand the rigorous process,” he said. “That makes it more valuable to me.

“They don’t take too many from the media. At the same time, if you live long enough and do a reasonable job, you have a chance.

“We all have people we… not idolise… but certainly appreciate when we are growing up. The elite footballers of the late 50s and early 60s are the ones who drove me.”

He retired from calling AFL matches for Channel 7; he retired from travelling from Perth to the east coast every weekend during winter to head up the television coverage of Australia’s number one sport.

But he is far from sitting at home every day with his wife Velia. Dennis can still be heard on radio calling AFL games played in Western Australia.

Displaying the gentlemanly qualities his voice can’t hide, he unselfishly stayed until the end of the 2016 AFL season before hanging up his microphone at Channel 7.

“Had I got out earlier, it would have been very difficult for the network to find another commentator who wasn’t contracted to someone else,” he said.

“I think I could have stopped cold turkey; I don’t think that would have been a problem.

“At the same time, half of my problem had been fixed by my retirement. When I was doing two or three games a weekend, quite often I’d be coming home from Brisbane. I wouldn’t necessarily just stay in Melbourne.

“So, coming back home and just doing one game on the radio, seemed easy pickings. But it’s amazing how suddenly, whatever you take on, it’s more than you anticipated.

“Now, with all of the radio football, I am enjoying it at the moment, and it’s quite flexible. But there are a lot of young fellas around who could do a good job, if I decided to retire – again.”

The mental toll is also much less now on Dennis. Instead of having to study six teams each weekend, which he did when he was covering three games, he now only has two clubs to dissect.

Not that he takes his responsibility any lighter now.

“Supporters know their clubs really well; they live and breathe them,” he said. “You can’t just come on without knowing what is going on and what is topical for the club you are broadcasting.”

Many of those supporters recognise more than Dennis’ voice. He does stand out in a crowd and enjoys a bit of a celebrity status… in most states of Australia.

It hasn’t really ever been a problem for him, and he welcomes the opportunity for a chat.

“I think for people to come up is terrific and I am happy to have a chat with anyone who wants to do that, unless you are running for time… you can make the excuse that there is something going on in your life and you can’t stay and talk.

“A few pleasantries never hurt anyone.”

In retirement, Dennis has also spent a lot of time in Channel 7’s archives, putting names to faces in thousands of photos of WAFL players from days gone by. He says it’s important to see that’s done before the images become unusable.

“The one thing I could do if I went on to a TV quiz show, something I would be very good at, would be to know (jumper) numbers of WAFL players of the 50s and 60s,” he said.

“And not only that, but what they look like. I don’t remember what I did last week, but I have this steel trap memory of music and football players of the late 50s through the 60s.”

Dennis’ knowledge and love for music from the 60s was born when he was a radio disc jockey it’s where he got his start in media after a brief playing career with West Perth.

Having time to return to that music is another thing he is enjoying now.

“I put play lists together, modern day and from the past, but not on the same play lists,” he said.

“So I drive around some days living in the 60s. It isn’t something I had time to do before I retired.

“I think a lot of people who retire, or who get to my age, sometimes just hanker for little things, that aren’t that important. But they are things that you had always wanted to do.”

Looking after himself is a passion though.

“The main thing is keeping active. I love getting to the gym every two or three days, it’s a regime for me now and I used to do it when I was travelling, but clearly I had less time.

“I think health is down to quite a bit of luck as well. You can only do so much and I am doing all I can.”

But let’s go back to the quiz show concept for a second.

What about a head-to-head battle between Dennis and his former on-screen partner (and surely future Hall of Fame inductee) Bruce McAvaney on football knowledge?

“That depends on which state we were doing,” Dennis explained. “I would need to take him out of his comfort zone, I think. South Australia…he would be very hard to toss.

“I think probably him, although I’d be very dangerous.

“I’d get him in WA, but overall he’d get me, I think. He is too good with figures and his memory is like a steel trap.”

That battle will probably never happen, but surely anything that would keep Dennis on our television is worth considering.