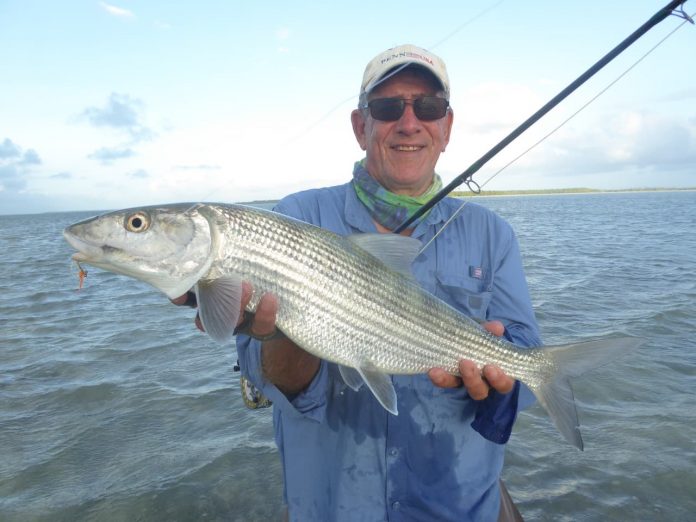 The ocean is not far from Mike Roennfeldt’s home, which seems fitting for this avid fisherman and writer whose columns in Perth newspapers over many years set a new benchmark for fishing in WA.

“I was naturally drawn to the ocean,” Mike says.

“I can still remember my first fishing experience beneath the jetty near Cicerellos in Fremantle. My father, Neville, was fishing with a hand line and he said, ‘you take it.’ It turned out to be a fair-sized whiting which was well and truly dead – my father had put it on the hook. I was not fooled by the experience but went along with it anyway.”

Another childhood memory when Mike was about eight was catching a pink snapper at Denham before his family headed to Dirk Hartog Island.

The small boy was experiencing his first joys of catching a big fish which would take him into adulthood. He was so keen that when offered a choice of bike or fishing rod for his ninth birthday, he chose the rod.

Born in Perth, Mike grew up in Floreat with an older brother and two younger sisters. The family moved to Melbourne when Mike was about 13, returning to WA when he was 25.

In Melbourne Mike attended pharmacy college (“I failed physical chemistry rather spectacularly on two occasions”), worked for IBM and headed for Europe for 18 months.

Back in Perth he opened a tackle shop in Watermans Bay which he ran for 10 years.

“I loved it, it was a lifestyle choice. The lease ran out and I opened a shop in Innaloo which I ran for another seven years.”

By then Mike was raising his five-year-old son, Toby, and life was busy.

He was approached by friend Ross Cusack, night editor of The West Australian newspaper, a keen fisherman and columnist, to co-author a book Fishing the Wild West, a handbook for WA anglers which was hugely successful, selling close to 50,000 copies.

Four years previously Mike had been invited by Cusack to join him writing a weekly fishing column for The West Australian.

When Cusack decided to give up his column a few years later, Mike was on his own and before long was writing two columns a week for The West as well as several local and national publications including Western Angler and Fishing World magazines, while still running his shop at Innaloo. It was a bit hectic but he was doing something he loved.

The two columns a week lasted 37 years under many newspaper editors until Mike, now 73, retired in June last year.

But he still writes a column for Have a Go News which started 27 years ago and is this newspaper’s longest serving columnist.

“I’ve always been around the ocean, apart from a time in the mid 80s when I escaped from the shop for a week or two at a time to dabble in gold prospecting, which was quite a change.”

Sheer perseverance, attention to detail and a love of fishing have stood him in good stead down the years.

“Probably no one has written fishing columns for so long,” Mike says.

“You have to be highly motivated and I was lucky to have great friends who helped me get to places and fishing I would otherwise never have experienced.”

There have been many memorable trips in WA and interstate.

“There were quite a few trips to the Kimberley and four coastal cruises; I’m still going to the Abrolhos Islands.”

Friendships have been forged along the way including a decade of beach and boat fishing with Channel Nine newsreader and journalist Michael Thomson and their respective sons. Mike’s son Toby is a keen fisherman.

Mike had a long stint with Thomson on Nine’s fishing show Just Add Water and was often sought out by television news to comment on some fishing issue of the day.

He was not afraid to become involved in various political issues, chalking up a few wins.

“The best fish? It depends of what you mean,” Mike says.

“For me, the best fish to catch are bone fish because of their strength, stamina and speed. Catching them in 30cm of water is challenging and fabulous.”

Mike swims almost every day, even when the water is rough.

“I’ve always been around the ocean, apart from a time in the mid 80s when I escaped from the shop for a week or two at a time to dabble in gold prospecting, which was quite a change.”

“Writing about kids catching their first fish or sharing stories that reinforce the power of fishing to cement lifelong family bonds. It was a joy to see the look on the kids’ faces as they proudly showed their catch and the heart-warming thank you letters I received over the years made it all worthwhile.”

In retirement, Mike’s love of fishing and the ocean endures. And what better place to enjoy it than WA and its magnificent coastline.

Ed’s note – thank you Mike for your contributions over the 27 years – we look forward to you being a part of this newspaper for many years to come.