I’m a huge musical theatre fan and when I heard Aladdin was coming to Perth, I excitedly started rubbing my genie lamp as I only had one wish and that was to see this show.

There was a heady atmosphere in Crown Theatre as people took their seats for Perth’s opening night performance of Aladdin.

As the curtain rose and the audience entered the extravagant city of Agrabah, the sets and stage took my breath away.

Shining star Genie played by Gareth Jacobs hit the stage and I was mesmorised by his performance, personality, costumes and talent.

The charismatic Ainsley Melham who stars as Aladdin brings a depth and heart to the ‘street rat’ proving that WAAPA has again produced another star.

Local Perth girl Shubshri Kandiah is the perfect Disney princess. With a voice like honey Princess Jasmine wows everyone with her big voice and big attitude adding a few feminist touches to the character and charming everyone along the way with her style.

I have never seen a Perth audience give anyone a standing ovation mid-show but everyone was so captivated by the Genie’s incredible performance of a Friend Like Me in the Cave of Wonders that when it finished everyone just stood, clapped and cheered.

There’s much talk about thieves in Aladdin but Gareth Jacobs stole the show with that number leaving everyone wishing they had a friend like him.

The back-up singers and dancers do not miss a beat, all intriguing and talented characters who add further appeal.

Every Disney stage show has the incredible ability to create magic and bring out the inner child in all of us and Aladdin does this spectacularly with its sets design.

The colourful and unique moving sets designed by Bob Crowley whose attention to detail and larger than life constructions continue the Disney pizazz across the whole stage.

There are an incredible 337 costumes used throughout the show made from 1225 different textiles, decorated with more than 700 different style of beads, including half a million Swarovski crystals that glitter and sparkle adding to the magic.

Add in a few special surprises for the audience, Aladdin is one of those shows that will stay in your mind forever.

I felt the Disney magic the most during the number A Whole New World where Aladdin takes Jasmine flying through the starry night on his magic carpet which floated in the air leaving everyone gasping. 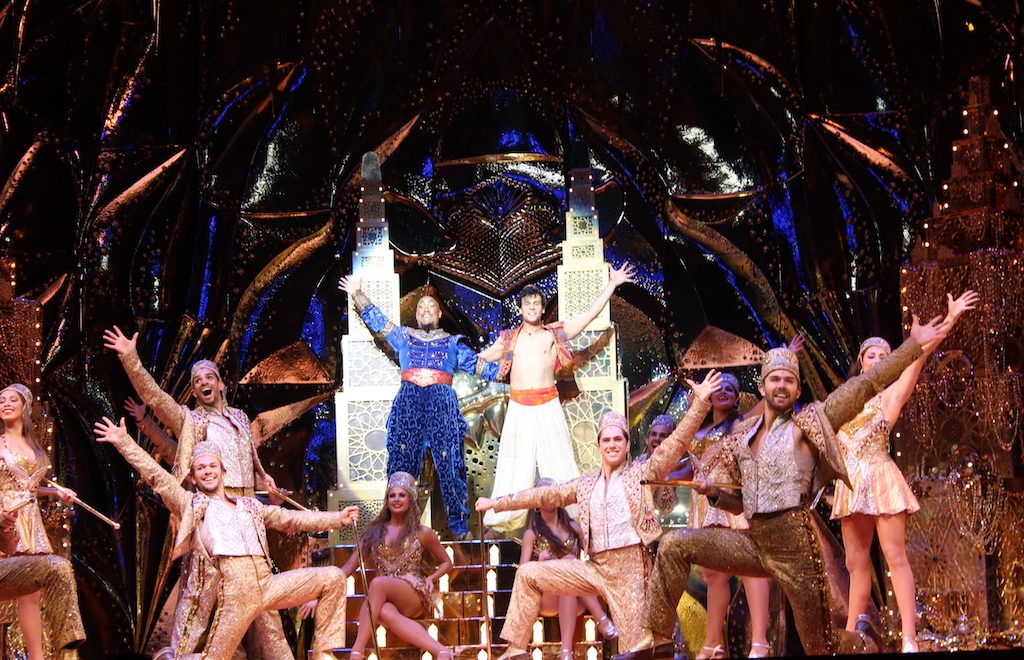 Suitable for all ages, featuring all the classic songs from the 1992 film and some added bonuses exclusive to the musical, it’s a must see for any Disney fan.

Make a wish or three and head to Crown Theatre – Aladdin plays until 21 October.

Tickets are available from Ticket Master