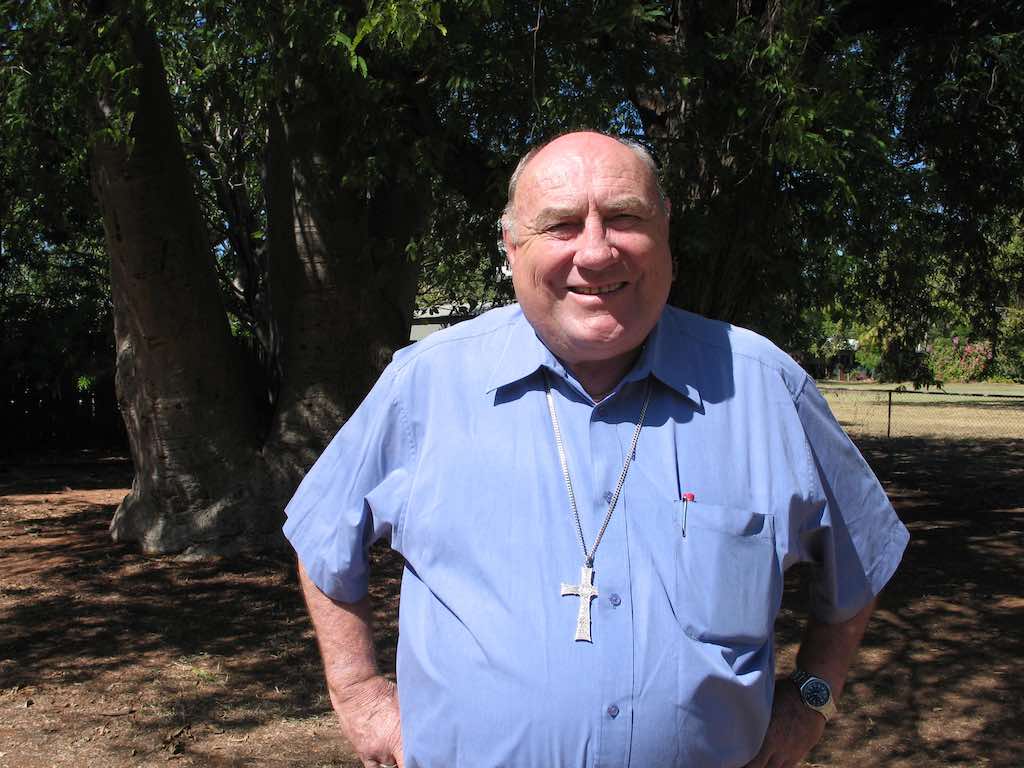 Chris Saunders at 68 has cruised beyond traditional retirement age but his line of business keeps him in harness until at least 75 years before he can give notice.

“Yes, I can see the horizon looming but that’s years away yet,” he tells Have a Go News.

As Bishop of Broome, the Right Rev. Christopher Alan Saunders has a huge challenge attending to a flock of 10,000 Catholics among a population of 50,000 spread over 773,000 km2 of the desert-dominated north-west.

One of the biggest diocese in the world, it has been extensively traversed by the Catholic leader in car, truck, bus, boat, on foot and by plane.

The son of a wartime Spitfire pilot, Bishop Saunders doesn’t fly the church Cessna any more – they now employ a pilot for that – but his calling takes him well into the red dirt and along the Kimberley coast.

“There are people who fall through the cracks who need assistance,” says Bishop Saunders who heads a team of 20 nuns and 14 priests plus many helpers.

“I make the 15th priest. I didn’t join the church to become a Bishop. I joined to become a priest,” he says in his Broome office.

Bishop Saunders is a big man with big tastes and a penchant for relating stories with dollops of colour and humour.

There’s a sign on his parking space: “Thou shalt not park here”.

Bishop Saunders is a familiar face all over the north-west and known and respected by church leaders, politicians, business leaders and movers and shakers.

He was a close friend of late British Lord Alastair McAlpine who is credited for the sympathetic development of Broome. Bishop Saunders helped lead the service for Lord McAlpine’s funeral in London.

Ordained a priest in 1976, the Right Rev. Saunders was named bishop of the Catholic diocese of Broome in November 1995 and appointed in 1996.

Since then, the affable church leader has overseen his team operating 13 schools, facilities, food and clothing for the needy including a four-day-a-week soup kitchen and support for the homeless in the north-west. He is recognised for his contribution to reconciliation between Indigenous peoples and whites.

During our interview, Bishop Saunders takes a phone call from an Aboriginal elder.

A keen ocean fisherman when he can get away, Bishop Saunders hasn’t wet a line for some weeks but says the tides look good for next Thursday and maybe he can find time to launch his little tinnie.

Someone recently phoned to ask if the Bishop had any fish but when told the Bishop hadn’t been out recently, a parcel of fresh barramundi fillets was delivered to his door.

“I’m spoilt,” says the man who has lived a life committed to his cause, often in the wilderness and treading a sensitive path between black and white customs and traditions.

The man who is trained to speak Latin, is able to communicate with tribes, clans and mobs of Indigenous peoples who otherwise have limited contact with whites. He understands their issues and, clearly, they respect his views.

He meets with other bishops at the Vatican every five years and then sometimes grabs time to indulge his interest in architecture and art.

Bishop Saunders played a key role in the Vatican Museum’s indigenous collection known as the Australia Catalogue. These works represent an aspect of human history through art. It began in 1925 when Pope Pius the XI asked missionaries around the world to send in works to reflect the spiritual and cultural daily lives of the people.

As a young bishop in Rome in 1998, Bishop Saunders was shown the Australian art, taken out of storage and unidentified. He identified artefacts and supplied their Indigenous and English names, citing their purposes as tools or weapons.

“The museum secretary took copious notes. It was a memorable day,” he told me.

The exhibit at the Vatican Museum is the first one seen by visitors leaving the Sistine Chapel – a nod to the place of Indigenous Australians as the world’s oldest continuous culture.

Late in his life, Bishop Saunders finally has family in his life. His brother Michael, 60, came to Broome two years ago. He assists with church duties and supplies his brother with an early morning takeaway coffee from town.

“I get up early to pray, about 5am. It’s nice to have my brother (a former government school teacher) nearby. All my life I’ve lived on my own,” says the ever-cheerful Bishop who has thousands of supporters and followers.

The Bishop says he’ll ask Indigenous communities to nominate individuals and then make a selection.

Bishop Saunders has a sideline – producing photos for his church publications. He has been a keen photographer most of his life and was given a new camera after his was lost in the water during a photographic mission in the bush.

“I love taking the photos and they can be put somewhere where they are useful,” he said.