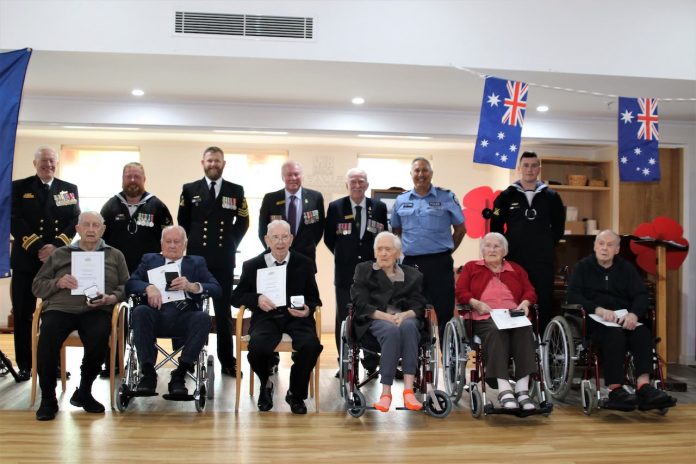 Six residents from Bethanie Fields Aged Care Home in Eaton, were commemorated for their contribution to World War II, in a special ceremony.

The event was held on 2 September and attended by members of the HMAS Stirling, Fleet Base West, the Western Australian Police Force, local RSL branch and Minister for Seniors and Ageing; Volunteering; Sport and Recreation the Hon. Mick Murray MLA.

Bethanie Chaplain Chris Green, who organised the event, said it was a privilege to be able to care for the veterans who contributed to the war efforts and to learn about their history.

“It’s an honour to be able to care for these veterans and acknowledge their efforts in World War II, particularly this year which marks 75 years since the end of the war,” he said.

Mrs Rose Monson was one of the few civilians to receive the recognition for her contribution as an ambulance officer at the Sydney Harbour during the war.

One of the last surviving Rats of Tobruk, Mr Fred Rose, was recognised for his contributions in the war after he and thousands of other Australians withstood an eight-month siege at the Libyan port of Tobruk. The soldiers resisted months of tank attacks, artillery barrages and daily bombings.

Mr Stanley Hodges was also a member of the Rats of Tobruk. When enlisting into the army, he deliberately put up his age as a 17-year-old so he could go to war.

Mr John Cooper, Mr Don Brown and Mr Brian Zappelli were all eager 18-year-olds when they joined the Australian army.

South Perth welcomes back the historic tram at Windsor Park

Stepping back on the board and giving a nod to Australia’s...