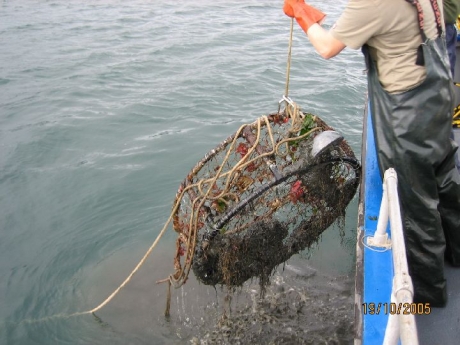 There’s an activity that both commercial and recreational fishers truly dislike and that’s when someone else interferes with their fishing gear.

Some fishing gear, like rock lobster and occy pots, can be left unattended while the pots fish, until the licensed owner comes back to check how lucky they’ve been with getting a catch.

In Fremantle Magistrates Court this week (Tuesday 10 September) a 65-year-old Forrestfield man was issued with a $3,000 fine and court costs of $225.90 as an important reminder to him, or anyone else who interferes with fishing gear, that it is considered as a serious offence.

The man had made an early guilty plea and the magistrate granted him a spent conviction, but he will have to pay the fine and costs.

The court heard that back in December last year in Cockburn Sound, the accused had retrieved his anchor, which was entangled with a long line of octopus shelter pots.

He removed one of the pots from the long line and retained it on his boat. That pot was owned by a commercial operator and, on the last day of December, the offender attached a yellow pool noodle and white float to the shelter pot’s rope, and set the gear in Cockburn Sound in an attempt to catch octopus.

The master of the commercial fishing boat had not given the offender permission to interfere with or use his octopus shelter pot.

This week’s court hearing was told that, in late March this year, Fisheries officers conducted a video record of interview in which the accused admitted to removing the pot, taking it home, attaching his float, fishing for octopus and checking it about two times.

“We have received complaints from commercial octopus fishers about recent interference with their pots, so if anyone has information on people doing the wrong thing I encourage them to let us know,” Mr A’Vard said.

“Unlawful interference with fishing gear carries a penalty of up to $25,000 and/or a term of imprisonment of up to 12months.”

Most fishers understand the need to do the right thing, however, if you see something involving fish or fishing that doesn’t look right, then FishWatch provides a quick and easy way to report it 24 hours a day, 7 days a week. Call 1800 815 507.