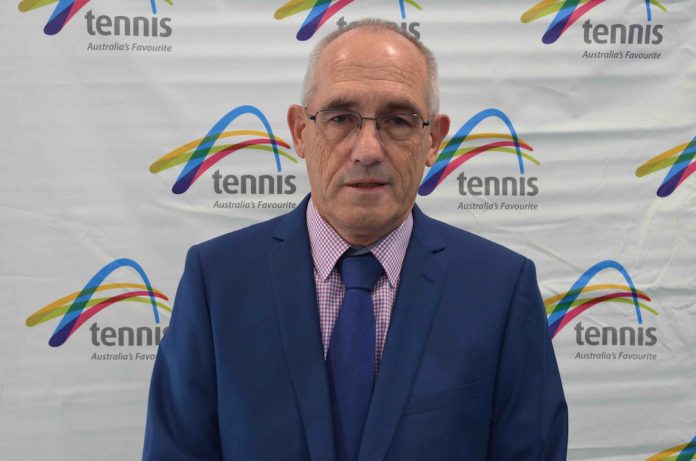 Devoting almost 50 years of volunteer service for the betterment of tennis in Western Australia, former Tennis West President Wayne Firns (Dianella) will be recognised during this year’s May 18-24 National Volunteers Week.

With this year’s week of celebrations championed by the theme ‘Changing Communities. Changing Lives’, celebrating Firns’ efforts, which span near on half a century, aptly highlights the significant and valuable impact volunteering efforts can have on communities, groups and individuals.

Having grown up living-and-breathing tennis and exposed to his father’s volunteering commitments, Firns says he often claims to have been born on the tennis court. Asserting an innate love of the game and the positive influence of his father, Firns claims both motivating factors as the driving force behind his five decade service.

“I tell people that I was born on the tennis court because my parents first met at the Broome Tennis Club in 1946, Tennis became a very important part of their lives and it therefore became part of mine as I grew up,” he said.

“My first memory of tennis was as a seven year old going to tennis with my parents on a Saturday afternoon in Pinjarra where they only had two courts and you had to be quick to get a hit whilst the adults broke for afternoon tea.”

“My father Bob Firns worked in the Post Office and as a result we moved around a lot, mainly in the South West and wherever we went, he always got involved in the local tennis club as a committee member and most often as Secretary, and that’s where I came to learn the value of volunteering,” Firns said.

With an impressive standalone volunteering resume that would trump the average person’s working history, Firns has served on countless committees, boards and tribunals over the years; holding a variety of key roles as a committee member, advisor, delegate, treasurer, director, chairman, vice president and president. Granted life membership to the Mount Lawley Tennis Club in 1993, Firns was further recognised for his efforts and awarded the Tennis West Gold Award for service to tennis in 2001.

“My first club committee involvement was at the Kwinana Tennis Club in 1971, where at age 21, I was the Chair of the Pennant Selection Committee.”

“I then joined the Mount Lawley Tennis Club in 1977 and during that same year I joined the committee as the promotions director.”

“In total, I spent some 23 years involved with the Mount Lawley Tennis Club involved in a variety of committees and as a member of the Board of Directors, 11 of which were as President.”

“It was during my time as President of Mount Lawley in the eighties that my involvement with Tennis West began when I joined the Shield Match committee which is known today as the Tennis League Committee.”

“I spent around 15 years on that committee and was part of many changes including the 1991 name change and the introduction of player grading.”

As a director on the Tennis West Board in the 1980s, Firns took an extensive hiatus before returning to a director’s role in 2008. As the Board’s vice-president for three years from 2012-2015.

He eventually went on to hold a five year term as president between 2015 and 2019. Respected for his influence and direction in bringing operational change and modern day best practice to the sport’s governing body, Tennis West CEO Michael Roberts says Firns leadership brought unprecedented change to the organisation.

“During Wayne’s time on the Board, he led the charge in modernising the Boards governance of tennis in WA which was recognised and applauded by the State Government at the time,” said Roberts.

“He brought significant modern day best practice changes to the constitution which ultimately resulted in less operational work for the Board and the Board elect President.”

“Perhaps of most significance to our 180 affiliated clubs and their members, was Wayne’s influence on bringing changes to our affiliation model which ensured increased investment across all clubs.”

“In doing so, Wayne was instrumental in strengthening the working relationships between our clubs and the Board,” Roberts said.

When asked to highlight a stand out moment from his years of commitment to tennis in WA, Firns concurs with Roberts, noting that his involvement in bringing constitutional change to better align with modern day best practice was a significant achievement that he’s proud to have been involved with.

“What really stands out for me was being Chair of the Tennis West Governance Committee in 2012.”

“The constitution was very out of date and although a review had been muted for a number of years, it hadn’t happened.”

“Following a review by KPMG, some help from Tennis Australia and after much work, a new constitution was developed.”

“The new constitution was passed with an overwhelming vote in favour of its acceptance and this along with further changes made in 2018 contributed to much better governance of the organisation.”

“Being part of the Tennis West Board that initiated and completed the biggest governance changes in the history of Tennis West was something I’m very proud to have been a part of,” Firns said.

Thankful for the opportunity to have been involved with such significant and welcomed operational changes, Firns says it was an unexpected turn of events which ultimately lead him to be at the forefront of the Tennis West Board, a role he says brought him great honour and immense satisfaction for the changes and redirection he was able to be a part of.

“After my retirement from the Board of Mount Lawley in 1993, I thought that would be the end of my involvement in club administration.”

“I remained on some Tennis West committee’s and joined the committee of Tennis Seniors and then following the Mount Lawley’s 2004 AGM, the club were left without a president.”

“After being approached by a number of people to take on the position I reluctantly agreed which led me back to taking a more active role with Tennis West where I returned as a council delegate.”

“I resumed my involvement as a director on the Board in 2008 before a stint as vice-president between 2012 and 2015, when I eventually took on the Presidency in 2015.”

“It’s certainly something that I didn’t set out to be and would not have happened had I not taken on the President’s position at Mount Lawley in 2004.”

“Being the president of Tennis West was a privilege that only 18 others before me had held, interesting to note is that I was the third president to have originated from Mount Lawley.”

“The experience was exciting as it was a period of continuous change, improvement and development.”

‘We had a very good Board with a great mix of experience in different and important areas, it worked well,’ Firns said.

Pivotal roles aside, Firns says that volunteering is a wonderful opportunity for like-minded people to come together in working to improve the social, physical and mental health of our communities.

‘Volunteering brings likeminded people from all sorts of backgrounds together to help in the community, it contributes to the mental well-being of those involved,’

‘It adds another dimension to people’s lives, provides a balance and an outlet from other aspects of life, like work and family and it helps to influence how people approach their paid employment,’

‘They say a balanced life revolves around four main elements. Family, social, recreation and work. Through my involvement in tennis I had three of those elements. Work was just a sideline,’

‘Volunteering in tennis has been my life and it’s been a great way to contribute to society, use my skills, learn new ones and enjoy any success that is achieved,’ Firns said.

Applauding Firns lifelong contribution and the collective dedication of the sports tireless volunteers, Tennis West CEO, Michael Roberts acknowledges the priceless impact of volunteers on the delivery of tennis and the proficient running of clubs across both metropolitan and regional WA.

“Without a doubt our volunteers are the lifeblood of our sport, without them we simply couldn’t operate or deliver on our projects, programs and pathways.”

“Australia wide, more than 5.8 million volunteers are estimated to collectively contribute more than 743 million voluntary hours to the community and we know that many of those hours are at the hands of the hard working volunteers in our clubs.”

“We are enormously indebted to our volunteers and look forward to celebrating their efforts virtually throughout National Volunteers Week,” Roberts said.

Facilitated by Volunteering Australia, the 2020 National Volunteers Week will this year be a virtual celebration of Australia’s volunteers.

For more information you can head to: https://www.volunteeringaustralia.org/#/

Share your messages of support to those in need