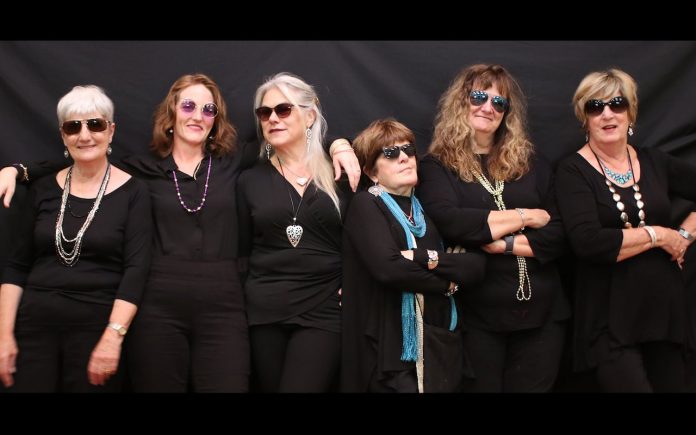 Many older women turn to something different in their lives when overcoming adversity. Perth based Secret Women’s Business is a choir of sassy, inspirational women who just love to sing together and have experienced life’s pitfalls along the way.

“Our hope is to inspire other women, encourage them to try something new and make a difference to their lives,” said spokesperson Benita Devins.

“Many of us took up singing after a turning point in our lives – maybe a battle with cancer, mental health issues or the loss of a partner.

“Singing with a supportive group is a great healer, both physically and mentally. We’re definitely not a traditional choir, much more a crazy bunch of entertainers really. We first started four years ago, many of us having sung in one of Martin Meader’s Born to Sing choirs.

“We were looking for something different, a smaller group, a chance to try new things, improve our singing, but most importantly have a great time doing it. At first, we met once a week to rehearse, and in the past we have performed at Perth Town Hall, Rigby’s, The Moon Café, Voice Moves and the Dunsborough Songfest, but when we were asked to do three complete shows for Perth Fringefest this year it was time to up the ante.

“So, we now rehearse Thursday evenings and Saturday mornings, currently at St Hilda’s Hall, North Perth. Although it’s a big commitment we soon realised it made us a much more cohesive group, forging strong friendships and more confident singing.”

Benita said the choir currently had 17 members, with two more in training. One of the new members described being accepted into the choir as: “now being on a journey to be a performer not just a singer.

“You have to be a team player in this group, everyone supports each other and shares the load of setting up the stage before and after a show, selling tickets and other chores.”

So far this year, Secret Women’s Business has sold out every show, the Fringe at North Perth and Bicton and Kalamunda Performing Arts Centre and audience feedback has been positive.

The choir is hoping for a full house at its next show at Subiaco Arts Centre Saturday 7 August 7pm-9pm. After that it performs at Toodyay Memorial Hall on Saturday 11 September with a few other dates still to be finalised.

“Apart from singing some beautiful harmonies and performing songs the audience can get involved in a few parodies of well-known songs. We are lucky enough to have two women in the group, Helen Lowth and Sheila Tipper, with great talent for rewriting the lyrics.

“Helen created a Bunnings skit to the tune of Big Spender and Sheila has converted Tom Jones’ Delilah, Dusty Springfield’s Wishin’ and Hopin’ and Neil Sedaka’s Breaking Up Is Hard To Do and many more with hilarious results.”

Says Sheila: “I have been writing light hearted and humorous poems for family birthdays, weddings and other special occasions for many years. They have always been met with laughter and appreciation. It seemed a natural progression to turn to song parodies as I was in a singing group.

Once I have an idea for a parody it doesn’t seem to take long to get it all together. Sometimes the song idea comes from someone like Martin Meader or I may look at songs from a particular era for inspiration.

“I love to hear audience feedback as I introduce a comedic take on popular songs and listen to their comments after the show. I feel proud to contribute to our show in a way that brings a smile to people’s faces or a laugh out loud moment.”

Dissolution and regeneration of works gives pause to audiences