Caption; Left to right; Roman manning a kissing booth with Peta Samson – a feast fit for a English Mastiff – all
dressed up for a pool party – Roman taken for a ride in a police car

Roman, the English Mastiff, could never be described as light weight. To start with he weighs a hefty 86 kilos and secondly, he has the constitution of an iron man.

Roman was diagnosed with bone cancer at the beginning of the year, but rather than give in to the cancer, his mum Peta Samson has been keeping up the fight with regular chemotherapy treatments – and so far, so good.

When Peta first found out about the diagnosis, she wrote a bucket list of adventures for him to tick off, to ensure Roman’s coming months were filled with fun.

So far, he’s managed to take on everything from manning a kissing booth to a ride in a police car and Peta says the big fella is coping well with chemo and has just completed his sixth round.

She says that unlike humans, chemo does not affect dogs in a negative way.

“Roman runs in and out of his chemo sessions. He spends two hours every three weeks hooked up to a drip feeding him the drugs,” she says.

“At his last scan, his leg looked great. I also have him on a cancer starving diet which includes a lot of traditional Chinese medicines as well.”

Many people will recognise Roman from the Treat Truck, which visits various markets around Perth and has been a regular at the Inglewood on Beaufort Monday Night Markets for many years.

Before creating Woof Meow Tweet Squeak in July 2011, Peta had worked in pet retail, kennels, catteries, the RSPCA and as a nutritional adviser for a major pet food company, so it’s no surprise that so far, a combination of chemo and diet are working.

“Roman is doing great. He has no idea what’s going on,” Peta says.

“He still goes swimming every week, still works in The Treat Truck with me and is not on any other medication. “

He still has a handful of things to do on his bucket list and Peta is hopeful that she’ll be able to add more.

“I’m not sure what Roman’s favourite thing on the bucket list has been but I’m guessing our holiday to Denmark was up there as he got to swim in crystal blue oceans and dined on gourmet grazing platters.

“Some of the last things remaining on his list we are having trouble with, so if anyone can help out with those, we would greatly appreciate it.

“In the event he doesn’t finish them, his brother Peperoni, a French Bulldog x Aussie Bulldog, will step up and complete the list for him,” she says.

Already ticked off Roman’s bucket list are: go on a picnic; eat fillet mignon; watch a sunrise and sunset; eat a tomahawk steak; eat crayfish; take a selfie a day; have a bubble bath; go on a holiday; eat fish tacos; see snow; visit an iconic monument; do a photo shoot with mum;  play in a pit of teddies; be a ninja turtle; drink a strawberry milkshake; have a pool party; create art; eat ice cream cake; have a gourmet grazing platter; wear a tuxedo; swim at the beach; photo with an ice cream truck; and Valentines dinner.

Still on the list are: go camping in a tent; go on a boat; meet someone famous; visit a nursing home; be in a movie; meet a pig; host Donut Day; fight for animal rights; ride in a limo; and ride in a convertible.

And perhaps the most heart-rending of all: to have my eighth birthday party. 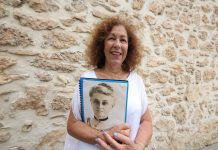 14/02/2020
We use cookies to ensure that we give you the best experience on our website. If you continue to use this site we will assume that you are happy with it.Ok