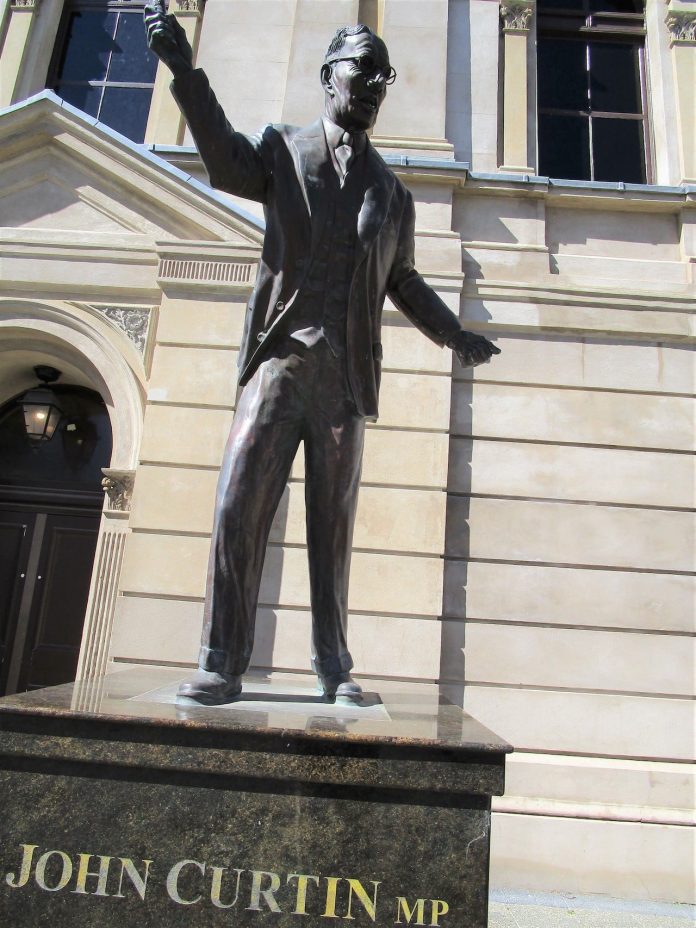 Baby boomer Barbara Davidson fondly remembers her childhood running around Cottesloe and her doting grandma, Elsie, who would give her grandchildren a generous one pound on their birthdays.

Elsie, the wife of Australia’s great Prime Minister, John Curtin, lived 30 years longer than her famous husband who led Australia through World War II but died tragically at age 60, within sight of the war’s end.

“We knew granddad had been Australia’s Prime Minister during the war and we had his photo in our lounge but we didn’t know much more,” said Barbara who lived across the road.

Barbara’s businessman brother, John, is the fourth John Curtin in a tradition that began with the Prime Minister’s father.

Barbara, 74, retired after teaching around WA, Britain and Canada and lives with her retired teacher husband, Gary.

“In later years, through reading in libraries I found out more about granddad. Dad told us a little bit from time-to-time but it just wasn’t talked about in the family,” she said.

The full John Curtin story has emerged over the generations with Barbara’s son, Toby Davidson, a poet, this year releasing a surprising book on his great grandfather called Good for the Soul. John Curtin’s Life with Poetry.

John Curtin’s own notes revealed: “I devote at least an hour (every night) to reading poetry”.

Barbara said: “He loved his poetry and although he didn’t write any to be published, he encompassed poetry in his speeches. He remembered it,” says Barbara.

“Curtin left school at 13 but he was a very keen reader and would study in public libraries in his early years.

“He came up through the rough-and-tumble unions and was a big supporter of workers and so was grandma, who would support and attend Labor events all her life. Her father, in Tasmania, was a union organiser so they all supported workers’ rights.”

Barbara recalls Sunday family outings: “with me in the back of the car going for a picnic to Kalamunda or somewhere, squeezed between my two grandmas.”

“We lived opposite my grandparents’ house at 24 Jarrad Street, Cottesloe, which was bought by the government when Richard Court was in office and taken over by the National Trust. Grandad designed and had the house built. The Curtin family were the only ones ever to live in it.”

Barbara said her grandma had a good sense of humour.

“She took an interest in what John and I were doing and would look over our school reports but she was non-judgemental and liked little jokes. Fun things. She was active but restricted for a long time with a bad knee.”

Barbara said her grandfather had health problems through his life and she believed the stress of running the nation during the war caused his death.

In 1944, Curtin was required to go on a long, health-draining, wartime mission to top-level meetings in Washington and London and get back to Australia for War Cabinet meetings.

“Grandma kept in touch with people like Eleanor Roosevelt and poet, Dame Mary Gilmore. She read a lot and always corresponded. There were always things going on for her. She had visitors to the house and played the piano.

“Grandma would come to our house across the road for Christmas lunch and we would go over there to visit her. Grandma would give us kids Christmas and birthday presents and money for the Royal Show.

“For Christmas grandma would give us each a pound that was to go into the bank. That came in very handy later when I wanted to buy a car.”

Barbara said, like most baby boomers, she learnt little at school about John Curtin.

“Our school history pretty much ended with World War I. We were taught about the French and Russian revolutions and, in Australia, the early settlement of NSW. WWII wasn’t considered history yet.

“I started high school in 1959. School texts about our recent history hadn’t been written by then.”

Barbara said school kids were oblivious to her connection to the wartime Prime Minister.

“There was a boy in our class named Bruce Menzies, no relation to the former Prime Minister, but sometimes teachers would quietly chortle at our names,” she said.

Barbara said her grandfather was dedicated to improving Australia – to lift those having a hard life and would have been frustrated that he received his calling during wartime when he suddenly emerged as a leader.

She said: “He never wanted to be a wartime Prime Minister. He wanted to be leader in peacetime to introduce reforms. But many of those reforms did come. They were picked-up and implemented after his death.”

The body of John Curtin (1885–1945), Australia’s 14th Prime Minister and Labor’s longest serving leader until Gough Whitlam, was flown to Perth on a RAAF Dakota, escorted by nine fighter aircraft. He was buried at Karrakatta Cemetery in a family plot that includes Elsie who died in 1975.

Life upon the ‘wicked’ stage… and some of the wonderful characters