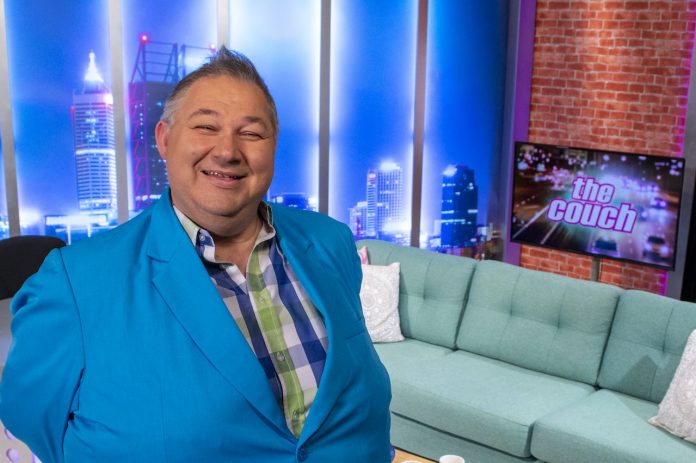 Fred Mafrica is a big man doing a big job, always with a big smile. Television’s most unlikely host is making a big difference for students, strugglers and Western Australia.

For 18 years he has fronted, managed and produced WA’s only locally-produced TV show. The
Couch airs nationally on FOXTEL’s Aurora Channel and in Perth on ACCESS 31.

To survive nearly a couple of decades in the highly-competitive, ruthless world of big-money TV takes some fortitude.

Fred has stuck to his ‘knitting’, without financial backing, producing a variety program with input from a small management team and grateful media students who have no other hands-on outlet in WA to learn behind-the-scenes skills.

“I’ve been very fortunate in life to be able to do the things that I enjoy and these days I try to be as healthy as possible and spend time with people I care about.”

Fred happily introduces guests who have genuine causes or have written, made or produced things of value, good use or entertainment.

“Look at the national TV shows, focussed on the eastern states. We have reversed that. We are showing that WA topics and people can be of interest to eastern states viewers,” Fred says.

At 53, with 30 years of caring for his late parents behind him, Fred is freewheeling in life as he sees it and loving it. Fred came to Perth, aged five, when his parents moved here with their five kids in 1972.

Hard-working Italians in a sometimes foreign-critical environment, the couple – Pietro and Maria – both developed health issues and Fred became their carer for three decades.

His tertiary studies, radio broadcasting and production at North Metropolitan TAFE, steered him to his life’s course in the media. But it was a circuitous route via government jobs including Department of Employment Education and Training (Austudy section), Health Insurance Commission and Medicare.

Fred moved to Medibank Private as an administration officer and later support services manager. Then, as a customer services support officer with Centrelink.

Along the way Fred worked the microphone at 6PR, filling-in for most radio shifts and is still going after nine years.

“It helps pay for The Couch,” says Fred cheerfully.

His viewers – up to 60,000 a week – and radio listeners know they can turn to Fred for direction on dealing with bureaucracy or airing their issues and problems.

Fred’s weight battle is no secret as he waits for a gastric sleeve and attempts to lose a further 25kg, having lost 55kg already.

“I’ve always been big, it’s part of my life,” he says, philosophically.

Life for the big man in his brightly-coloured jackets is fine by him. It’s all he wants to do and apart from a couple of getaway trips to Bali most years, Fred’s absorbed with his open, friendly style of television.

With his Italian heritage, Fred the maestro masters lasagne, marinara and pasta generally.

“But what I really like is Indian food!”, he exclaims.

Each week The Couch juggles appearances from young and older Australians – giving people a go.

“We have interviews with TV, radio and print people but also people that have written books or maybe have a great story to tell,” he said. No-one gets paid.

The show is recorded at Leederville’s School of Isolated and Distance Education (SIDE) to give training and experience to students aiming to make their future in media.

The Couch has a lease with the Education Department for the studio and control room and works very closely with SIDE on many projects including taped language lessons for all schools.

“I’ve been very fortunate in life to be able to do the things that I enjoy and these days I try to be as healthy as possible and spend time with people I care about.

“I like to take it slow and easy when it comes to life. I have no career wants and I feel I am doing the things that I am meant to do. I love being around friends and family and love to share dinners and movies with them.

“I’m a very generous person that likes to live a very down-to-earth modest life,” says Fred in his usual understatement.

The Couch airs on ACCESS 31 and (and on its webpage) then nationally on FOXTEL Aurora Channel 173 on Sunday nights at 7.30pm. Have a Go News’ editor, Jen Merigan, is a regular guest.