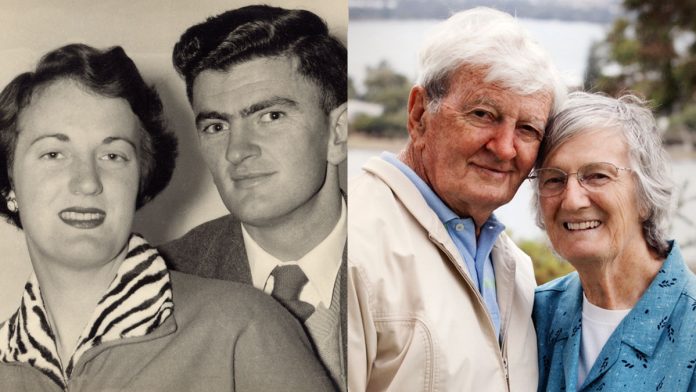 Jim, who was born in Essendon in Victoria, first saw his wife-to-be when he was visiting Armidale in New South Wales for a job interview, and admits he was so impressed that he decided to take the job.

At that time, Lin was a teacher at Armidale Demonstration School, where part of her duties was to give demonstration lessons to students from the Armidale Teachers College, and Jim was a scientist. The two would pass each other as they walked to work in the mornings and soon after, they were introduced at a dance organised by a social club.

The rest, as they say, is history, and the couple married at the Uniting (Methodist) Church in Earlwood in Sydney on 1 September 1966.

Jim was awarded his PhD from the University of New England in 1959. Soon after, they set off to England, together with their daughter who was born in in Armidale, on a post-doctorate scholarship at Rothhamsted Research Station, just outside London. Their first son was born in England.

Jim says he was lucky enough to be offered a job in Perth with CSIRO in Floreat and they moved to Western Australia in 1961. Their third and last child arrived in 1964. Jim officially retired in 1992 but has continued with his research work since. He is currently an Honorary Research Fellow at the University of Western Australia.

“We had our first daughter in Armidale, our first son in England, and our second son in Perth, so that very much reflects our travels in the first few years of our marriage,” says Jim, who lived with his family in Wembley Downs for nearly 30 years and then Mount Claremont, again for nearly 30 years.

“When we lived in England for 12 months it was not practical to do much travelling because we had two small children. But later, when the children had grown up, we were able to do much more. Lin could speak Italian and I could speak German, so we got around Europe and South America fairly easily.”

very much reflects our travels in the first few years of our marriage.

Today the couple has eight grandchildren and two great-grandchildren, with another due in November.

And as for the secret to the longevity of their marriage, Jim says it comes down to patience, tolerance and a strong, abiding love.

“Everyone at Mercy Health was very keen to wish Lin and Jim all the very best on a momentous anniversary,” Mr Flores said.

“Jim visits Lin every day here at Mercy Place Mont Clare, and it’s clear to see they have had a truly committed and dedicated marriage; reaching such a milestone anniversary is a wonderful achievement.”

Stepping back on the board and giving a nod to Australia’s...