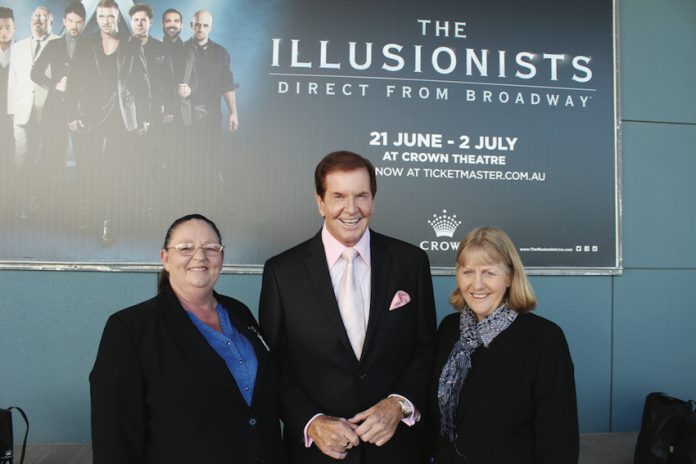 JOHN Burgess is celebrating his 51st year in the entertainment industry with a career which has spanned radio and television.

He first arrived in Perth in 1978 for Kerry Packer working on radio 6PM taking over from Martin and Watts.

“It took me about a year to get to the top spot and then I won 80 surveys in a row, I said I’d come for two years and stayed for 12,” said John.

Have a Go News spent some time recently with the much loved radio and television personality at Crown Perth.

John has become part the Crown Perth family, he was a star attraction at last year’s Have a Go Day and every Tuesday he welcomes Crown bus guests and presents prizes in the Riverside Room having a few laughs with patrons.

John has just finished a month of promoting Burgo’s Wheel of Prizes where he has been spinning his wheel of prizes every Friday and Saturday night.

He said that each time he works at Crown people of all ages come up for a selfie, he probably has 50 to 60 photographs taken each night.

John’s popularity has certainly not waned, as we walk through Crown together people stop and say hello. I ask him his secret to the longevity of his popularity.

“It’s probably a reflection on the way I have presented myself over the years, what you see is what you get, I think people appreciate that I manage to make people laugh and make them feel a bit better.

“People are really nice and I meet a lot of lovely people here and at events like Have a Go Day, they want to shake your hand, say hello and have a photo.

“It’s a great compliment that they are still interested in what John Burgess is doing,” he says.

“I really like working with Crown Perth because they really give back to the community.

“They have great oﬀers for their customers especially with their value guarantee packages and they support lots of good causes.

“The Crown bus program offers people the opportunity to come for a great day out for $10 which includes transport, lunch and some reward oﬀers.”

Since 2012 John and wife Jan have made Perth their permanent home.

I asked John what are his tips for healthy ageing.

“Over the years I’ve given myself a bit of a hiding but these days I eat a lot more sensibly than I used to and I drink a lot less.

“It’s about balancing your diet and your approach to what you do. We exercise, we walk regularly and I do a bit in the gym.

“We eat healthy food and lots of vegetables and Monday to Friday are the days we look after ourselves and Saturday and Sunday are our indulgence days and then we start our healthy routine back again on Monday.

“We walk five out of the seven days. My favourite recreation activity is definitely golf and I’ve been a member of Royal Perth Golf Club for 34 years, I even stayed a member when I haven’t lived here,” he said.

Retirement is not on the horizon for Burgo.

He’s on radio 6IX every Saturday morning and on Channel 9 every week locally and nationally.

“I tried it (retirement) once for about two years back in the ‘90s and I didn’t become a nice person to be with and my wife said you had better go back to work.

“I’m a big believer in keeping your brain active as long as you’re able and I don’t see a reason why you should give up every thing because you’ve reached so-called retirement age.

“I read somewhere the other day that people can expect to start living to 120 with all the vitamins etc that we take and then I read something else that said that the roads are going to be so clogged in Perth and I worked out that the extra years you get will be spent in your car,” Burgo says laughing.

And what is Burgo’s tips for well-being and happiness…

“Happiness starts at home – it’s important that you look after each other I vacuum, I wipe up and help out in that regard.

“I support my wife in whatever she is doing and we watch our diet and exercise together. A happy wife equals a happy life,” Burgo says.

Closed: The Right Place by Carla Caruso, The Lost Pearl by...