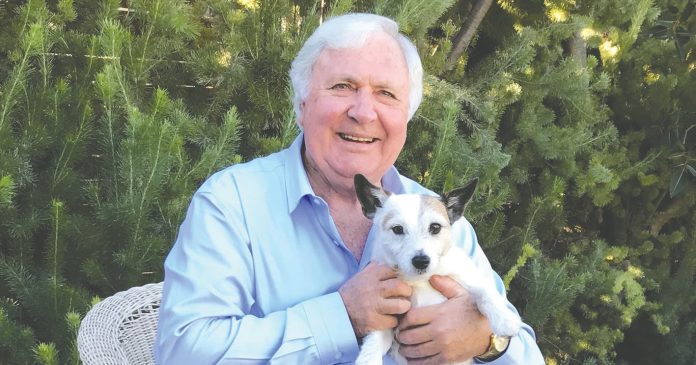 At 83, West Aussie media legend Bob Maumill has taken a backseat to broadcasting.

From politics and entertainment to his great love of footy and racehorses, Bob provided his audiences with rare insight, intelligence and fun. Bob was never boring.

He always called it as he saw it, dominating radio ratings for a generation and an instant hit when he took over a microphone in Sydney. He was also a natural.

Bob, as always, is better putting it in his own words.

Q. As an octogenarian, you are able to look back at life and make a few judgements.

A. I’m a pessimist. Human beings are destroying the planet. Our obsession with growth and the ever-increasing population needed to drive world economies can only lead to disaster. We need to re-think the big questions humanity faces or suffer the consequences.

Q. What’s the most fun you’ve had? Your favourite interest?

A. The love and respect of people I value. Watching Aussie Rules football, the friendship of dogs and the wonders of Australia’s unique wildlife and landscapes.

Q. Have Baby Boomers really had the best of all worlds?

A. I think so. But everything looks better through a nostalgic lens. Modern advances in medicine and the treatment of disease have saved lives and reduced suffering. In the past, there were the bad times as well as the good.

Q. How do you feel about today’s television and radio?

A. I like the advances in TV technology that has given us so much choice. Same with radio. Something on the dial to suit everyone’s taste. Sadly, the concentration of media ownership has created some issues concerning the veracity of news and information being fed to the public.

The recent American election was a frightening example of how some media moguls use their power to shape public opinion. The ABC is not without fault but, in my view, it fills information gaps, corrects misinformation and provides a necessary alternative.

Q. Would you have let your children have tattoos and nose rings?

A. Not when they were under my care but once they were old enough to make their own decisions it would be their choice. But I would prefer them not to.

Q. Is there anything you haven’t done that you’d tackle if you could go back a few decades?

A. I left school at 15 and left home not long after. I did all sorts of jobs and was sacked from quite a few. I was a scatter-brained dreamer. What little knowledge I have accumulated I have done through life experiences and reading. I owe a great deal to the State school teachers who taught me to read and write.

A. As a young man I travelled a lot. By 21, I had seen much of the world. At 40, I had formed different views on a lot of things. Our like or dislike of places is often influenced by the people we are with at the time.

In my 40s I met my wife, Sabrina. We spent time in rural Victoria and it was wonderful – weather and all. Of the places I visited overseas, most had their various attractions, places of beauty, historical interest or charm. At one time, years ago, I spent time in parts of coastal Sri Lanka it was beautiful. I briefly thought of living there.

Q. Did you have any heroes?

A. My views on politics and human rights were influenced by the writings of 17th Century activists, John and Elizabeth Liliburne, the America writers James Baldwin and John Steinbeck and the stories of hundreds of people I have met during my life’s journey.

As for people in the media, none more than the two who started my media career, Barry Thomas and Brien Thirley. Later, Dennis Cometti, Steve Gordon, Cheri Gardiner, Declan Kelly and the incredibly and outrageously talented (most politically incorrect) George Grljusich. John Singleton and George Chapman gave me opportunities that I squandered. I could name a long list of others.

Q. Do you think about the inevitable and I don’t mean taxes.

A. At my age and with my health issues past and present, the inevitability of death is something I have confronted, thought about and accepted. I am grateful for the life I’ve had and the small circle of people whose love and care has sustained me.

Q. You are undeniably a media legend. Does it come naturally?

A. Labels mean nothing. Actions matter. I was born into a battling blue-collar family. Thankfully, with some good luck, lots of cheek and the help of some good people I achieved more than I deserved.

The most admirable qualities in human nature are kindness and compassion. The worst are greed, hate and the inability or refusal to see the other person’s point of view.

The man who shook the airwaves

Ex-Bunbury boy Walter Robert Maumill left Fremantle Boys High School to become an abattoir worker, shearing hand, cattle drover and horse trainer. Invited to do a sports and horse-racing guest spot on 6IX, he was paid $10 and a taxi voucher.

Bob then took on talk-radio with Maumill at Midday –  “I was brash, fiery, and anti-conservative” – ratings soared.

Bob topped Sydney afternoon radio, was dining with Kerry Packer, starring on Sydney and Melbourne radio and TV. Mixing with the big-names in media and politics.

Bob’s CD: stories about growing up in Fremantle are featured on Curtin Radio, are soaring. A Justice of the Peace, Bob was board member of Fremantle Football Club and vice-patron of the Bulldogs.

Selva’s positive predictions and outlook for WA next year