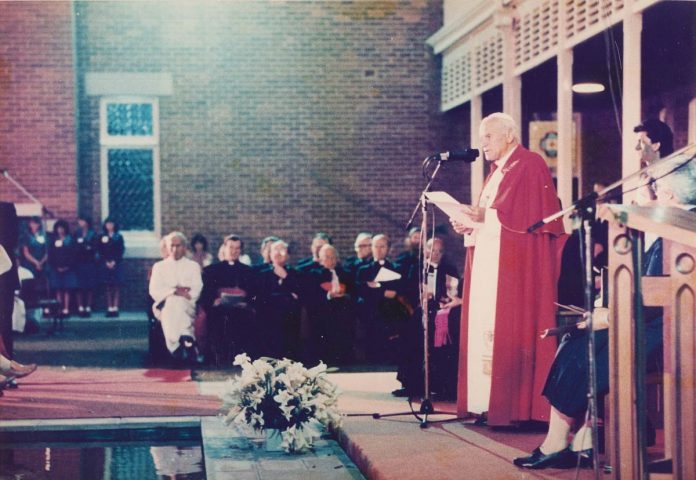 An airforce jet touched down at Perth airport and a specially-built Mercedes eased its way out onto the tarmac at 1.30pm on Sunday, 30 November, 1986.

When a historic 66-year-old figure emerged from the jet, 1,000 people waved yellow flags and signs including: ‘John Paul II, we love you.’

The Pope had arrived in Perth, only the second Pope to visit Australia after Pope Paul VI’s 1970 tour.

Whisked away in his ‘popemobile’, His Holiness was on an active program that brought together many of us non-believers as interested observers, as well as the Catholic faithful by the tens of thousands.

In just short of a week in Australia, the Pope travelled 11,360 kms, attended 38 functions and visited all States and territories. Perth was the final stop.

As State Government leaders, VIPs and church officials waved him off, the ‘popemobile’ headed to Belmont Park racetrack where the Pope led a 70,000-strong mass.

He then turned-up in Leederville to open the Catholic Education Centre, answering more than a few local Catholic prayers. In quite a coup by Perth’s prominent Dr Peter Tannock, it was the only building in Australia ever opened by a pontiff.

Dr Tannock had asked then Archbishop William Foley if the Pope could be invited to open the building.

“The invitation was accepted and by the time of St John Paul II’s visit, necessary renovations to the buildings had been made,” said a church statement.

Dr Tannock, 81, has been heavily gonged for academic, religious and sporting achievements (WAFL and AFL Life Member and vice-chancellor of Notre Dame University). He received a Papal knighthood (recognising a special bond with the Pope) for lifelong work in Catholic education and the Church.

In a speech to elderly residents of The Little Sisters of the Poor rest home at Glendalough, the Pope said: “I wish to express my deep affection for all the older members of Australian society in every corner of this land: those who are living in homes such as this; the many who are living with relatives or friends; those who live alone, especially if they are sick, disabled or            infirm.”

But he also made the point “that wherever I go, I enjoy being with the young.  They inspire me by their enthusiasm.

“But I also want you to know that I experience great happiness when I am with the aged. You give me a share in your peace and in the accumulated wisdom of your lives.

“I pray that Australians will always honour the old and show them special affection. I pray that public policy will always be based on absolute respect for their dignity and inalienable rights.

“And to young Australians I say: look at the treasure of humanity and wisdom that is yours in your old folk. Love them and be grateful to them.”

At the end of the Pope’s Australian visit, Prime Minister Bob Hawke said: “While you have been here you preached a message of peace, of hope and of justice. You reminded us of the dignity and importance of human work. You drew attention to the tragedy of unemployment.

“You issued a message of hope to the Aboriginal people. And you have caught the imagination and tapped the idealism of our young people who seek peace and justice in the world.”

John Paul II, history’s most-travelled Pope and the first non-Italian to hold the position since the 16th Century, died in the Vatican on 2 April, 2005, aged 84. Two million people attended the biggest funeral in history.