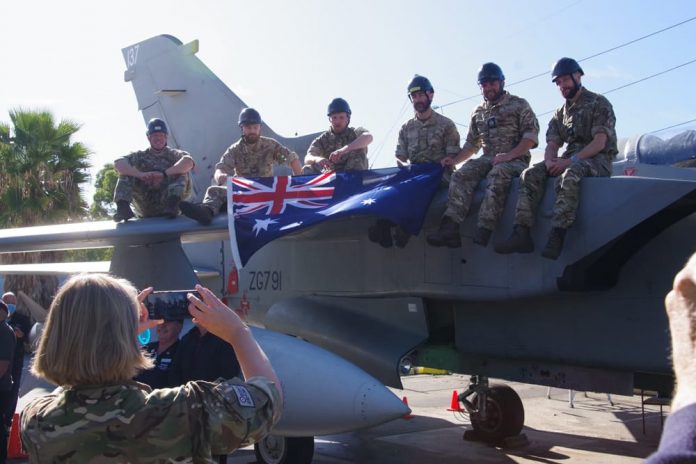 The Tornado was the only aircraft from the RAF’s now superseded fleet (many are still actively flying with other air forces) to be placed in a museum outside of the UK. Because of the classified technology used in this type of aircraft, permission was also required from USA top brass at the Pentagon before the aircraft could leave the UK.

The volunteer-operated public museum on the RAAFA estate in Bull Creek is acknowledged as the best centrally-located aviation museum in Australia and is honoured to be gifted such a militarily-significant warbird.

The seven-person squad lead by Wing Commander Erica Ferguson gave the ageing aviators a presentation of their role in recovering, dismantling and rebuilding RAF aircraft in various parts of the world.

During the event, a raffle was held in support of the Old Flyers group. Its president Steve Rogers asked Erica to draw the winning ticket, with the prize being a double pass to see the movie Top Gun – Maverick. Following the presentation, the team discussed their work in more detail with the ageing aviators, aero club committee and a young student pilot beginning her career at the club.

The following day a brief ceremony was held alongside the hangar, to which a new weather covering for the aircraft will be constructed. The keys to the aircraft were handed over to the AHM volunteers. RAAFA president Clive Robartson accepted the keys but was surprised to discover they were a massive heavy steel spanner, symbolic of what was needed to dismantle the aircraft and re-build it again in Perth.

An official government-to-government ceremony is planned for later this year when all the relevant RAF and RAAF top brass, as well as the usual gaggle of politicians will assemble at the museum to formalise the gift.

It’s all in the stroke for senior swimmers

Get a wiggle on and support the heart of the nation...