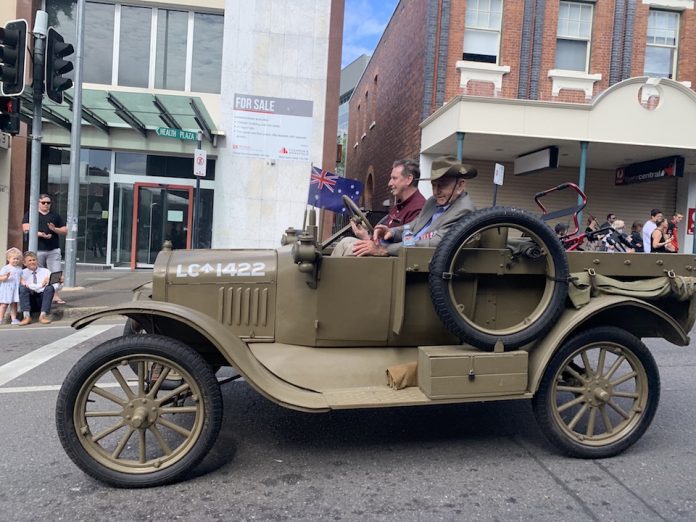 Ralph Edwards was born in Roma, in central western Queensland, on 21 April 1919 during the final months of World War I.

He served Australia in World War II in the Citizens Military Forces and then the Australian Imperial Force, spending time in Labuan, Borneo.

This year the commemorations for both his birthday (a socially distanced surprise cake cutting outside his home) and ANZAC Day will be different, but Ralph is no stranger to weathering tough times.

He has clear memories of a childhood without many of the comforts we take for granted today.

His family home didn’t have electricity, hot water, a telephone or a car. Instead, they used a horse and buggy to get into town.

Ralph vividly recalls life on the land, getting into mischief with his brother and over time developing a love of and knack for tinkering with cars after his father bought a 1917 Model T Ford.

“It took a long time to get the car going, and the ten-mile drive into town took an hour,” he says.

He was making that drive regularly by age 14, by which time he had been honing his driving skills for five years after his father began teaching him at nine.

“I can remember one day a police officer saw me standing beside the car. He came up to me and said, ‘Did you drive this?’

“I mumbled a yes and he said, ‘You’re a bit young, aren’t you?’ and kept walking. I thought I was in trouble,” Ralph laughs.

Ralph’s fascination with cars and engines has endured across a century. He tells how one day when his father was away, he tried to clean out the car engine, pulling it apart. Unfortunately, he couldn’t remember how to put it back together, and remembers hiding from his father to avoid the consequences.

In keeping with his enduring love of motor vehicles, he says one of the most remarkable inventions of his lifetime was the automated petrol bowser.

“My father had to buy a case of petrol made of soft pine nailed together with two four-galleon tins of petrol. He had to pour it into the car through a funnel. It was heavy and usually spilled,” he explains.

“When petrol bowsers came along, you could just pull up, pump the petrol in your car and be on your way. It was remarkable.”

Living off the land his family had to be largely self-sufficient, and Ralph’s father made a telephone for the house which involved buying the wiring for the house, connected it inside and in the trees outside the house.

“There were no instructions, no internet to check what you were doing, it was just trial and error, but my father was pretty nifty, and we got it done,” he says.

His home was about 2.4km from school, which was deemed walking distance. He remembers trying to find shortcuts, which involved crossing a gully and knocking the bark off trees, so he could find his way back again.

Recalling how small the town was there weren’t enough schoolteachers, so they would come to the town by train and board with families of students. Often would have his teacher living with him and his family, as his home was one of the closest to the school.

Ralph explains the life on the farm was simple. He had one brother and a sister and they spent their time exploring their surroundings and playing outdoors.

“We used to go fishing for crayfish down at the creek and one day we found a brown snake in a hole. For some reason we decided to pull it out of the hole and we accidentally pulled too hard and we pulled it in half,” he says.

“I don’t know what we were thinking we were going to do when it came out of the hole – it would not have been pleased with us. Had it not been pulled in half I’m sure we would not be here today.”

Ralph has many fond memories of Roma and his time living on the land and still returns there once a year and loves to see how the town has changed.

Last year, he was proud to ride in the Ipswich 2019 ANZAC Day parade in a 1917 Model T Ford just like his father’s.

He credits his long life to healthy lifestyle of no smoking, regular exercise and sensible diet high in vegetables, fruit, grains and the occasional glass of sherry. These days he lives in Bolton Clarke’s Milford Grange retirement living community and enjoys playing cards with his friends and having his family visit.

Please find a link to the front page of the paper with Ralph’s birth announcement: https://trove.nla.gov.au/newspaper/article/98177807

Iconic blue whale skeleton will be a highlight at the new...

Where opinions matter – saluting child migrants who grew up in...