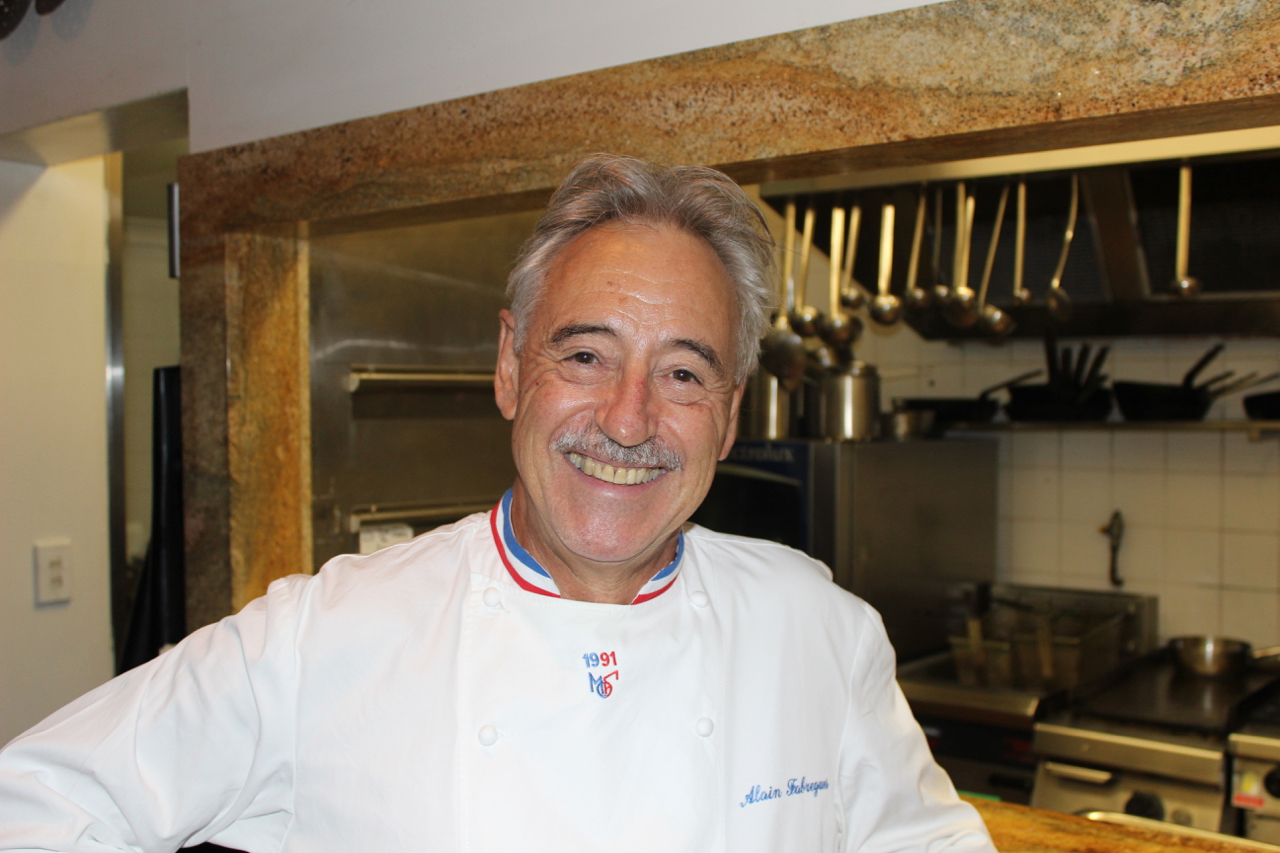 Alain Fabregues pours a glass of red wine to have with cheese and bread.

The French-born master chef has completed his day’s work at his Subiaco restaurant, Bistro des Artistes, and will be heading to his Toodyay property where duty calls.

It’s a weekly routine greatly appreciated by Alain’s two big dogs, Bella and Brutus, who get to romp in the open spaces and among the lines of trees that Alain has planted in a painstaking process to break new ground in agriculture.

Alain, 48 years in WA, is proving that the region is truffle territory. And it’s quite a story.

But during this evolution, Alain, the chef who brought a French revolution in fine dining to Australia, has been manning the barricades.

But when suddenly lumbered with soaring rents, the 69-year-old clashed swords with his landlord over the 66 per cent rent hike.

The outraged master chef vented his anger across the front windows of his Hay Street restaurant.

It was a distraction the busy chef, artist and truffle pioneer wouldn’t swallow.

Alain appealed to the authorities and after a Napoleonic dramatic struggle and sky-high legal bills, he pulled-off a victory and the rent came down.

But in the wash-up, Alain was required to continue his lease past his retirement date.

“It means I have four years hard labour in front of me,” Alain says this week.

But he took it on the chin, despite distractions like a hernia operation and a knee replacement, shed his “retirement weight” from 91 kilos to 75 kilos and focused on creating the finest French flavours for his life’s final culinary chapter.

He will also continue to cook at home for his partner, Ros, and his daughter, Natalie, 25, (“when she’s home. She has her own life”).

“If I do the cooking at home, it’s done in five minutes and there’s not going to be a mess,” smiles Alain.

Twice-knighted for service to French culture through cuisine (from Presidents Mitterand and Chirac), Alain also carries the prestigious MOF (Un des Meilleurs de France) as an outstanding practitioner in his field.

With a great-great grandmother who cooked for Napoleon’s army and a thoroughly-French foody family, Alain took on his chef’s apprenticeship in Bordeaux.

Then, at age 20, he took a ship to Australia where his eyes opened to “happy people with big smiles, blonde girls with blue eyes, not dark like in my country.”

The budding chef sweated on offshore northwest rigs and an oil rig in the Timor Sea, in a Darwin hotel and in Perth at the Parmelia Hotel and Mediterranean restaurant.

“It was easy to get a job here, there were beautiful girls and drive-ins which we didn’t have at home,” he said.

Alain had no English but began with tutoring by his girlfriend, Beryl, relating words from children’s books where he knew the stories from home in France.

Alain, a driving force behind WA’s truffle festivals, met and married Lizzie and together in 1979 they took on the Loose Box. They have since divorced.

Despite being in Sawyer’s Valley, well outside Perth’s cultural areas, the French fine-dining eatery hit its mark, attracting patrons from across Australia and twice-gonged for Best Restaurant in Australia.

Alain was ‘Chef of the Year’ four times until he was barred from further entry.

When Alain, an accomplished artist and sculptor, comes up with a recipe, he first draws it and then goes to work creating it.

His work illustrates a number of cookbooks including his Degustation, judged Australia’s best cooking book, 2010.

The glorious hardback of a whopping 384-pages, published by UWA Publishing, is an eye-appealing, mouth-watering delight to peruse.

Alain’s illustrations are professional, the photography and profiles magnificent.

There’s a heading: Sorrel soup with egg wash, the way my father liked it. And recipes like: Salmon and red emperor with a warm salsa of mushroom, tomato, garlic and thyme served with saffron emulsion.

Now facing his own final culinary chapter, Alain says he’ll be ready. “I will have cooked for nearly 60 years so I’ll be ready to paint, do some charcoals and sculpt,” says the kitchen master.

And, undoubtedly, watch over the revolution of West Australian truffles where Alain has been the French connection.

A little tipple is good for the mature brain says new...