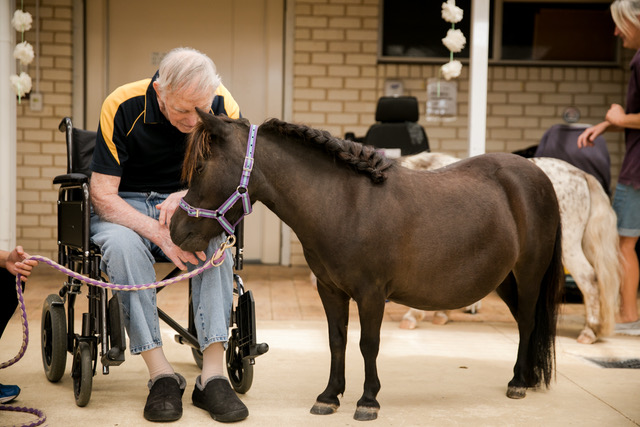 Memories from their younger days on farms were rekindled for many residents at Baptistcare’s Dryandra residential aged care in Kellerberrin when 14-year-old mini horses, Katherine and Silver came for a visit.

While dog visits are not new in aged care, Baptistcare is taking a different tact by introducing pony visits to their Kellerberrin facility where farming and handling horses has been a way of life for many residents.

According to Dryandra’s lifestyle coordinator, Shizuka Yokoi, interacting and patting the little ponies resonated with many residents who had lived on farms or who had horses growing up.

“We saw residents who were often quite shy, smile and laugh when the ponies came up to them.”

“Having access to horses and ponies is one of the benefits of living in the country in Western Australia,” she said.

Jonelle Tiller, who owns Katherine and Silver said the response was so good she intends to bring her ponies to Dryandra on a regular basis.

“I was very happy to see the positive effect the visit had on so many residents and I couldn’t be more pleased,” she said.

Jonelle runs a farm a few kilometres north of Dryandra in the Western Australian Wheatbelt where Katherine and Silver live alongside her daughter’s 10-year-old Welsh Cob, named Fleur. Katherine and Silver are firm friends and have been together since they were three weeks old.

“They do everything together, including eating and sleeping.”

“They are gentle souls who love human contact and while they might be in my care now, they were trained to socialise by their previous owner in Albany,” she said.

The pony visits were an initiative organised by Baptistcare who always go above and beyond to keep residents in their care happy and engaged.

Baptistcare has more than 45 years’ experience providing support and residential options for Western Australians in their senior years.  www.baptistcare.com.au

Looking for answers from older Australians