Leaders in politics, health, business, local government and police gathered in Subiaco, recently to mark a new chapter for Alzheimer’s WA – the opening of a new office for Alzheimer’s WA, above Subiaco railway station.

“Dementia is a challenge to those who are diagnosed, their families, friends and loved ones,” he said. “Early diagnosis is vital for early intervention and provision of lifestyle packages.

“Older people are best supported at home with better access to services. Keeping people living independently in their own homes, they have happier lives.”

Mr Cook said it was not helpful if people had to navigate complex services and he acknowledged the benefits of memory cafés for people with dementia.

New chair of Alzheimer’s WA, adjunct Professor Harding referred to world-leading research in WA into early detection of Alzheimer’s, of which Perth’s Prof Ralph Martins is a leader. Governor Kim Beazley is patron.

“People in WA who have been diagnosed deserve to live with joy, growth, meaning, autonomy and dignity in their lives,” he said.

Alzheimer’s WA CEO, Ella Dachs, said more than 42,000 West Australians were living with dementia and that number didn’t include those who had not been diagnosed.

Dementia remained the number one killer of Australian women and number two killer of men. 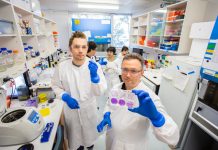