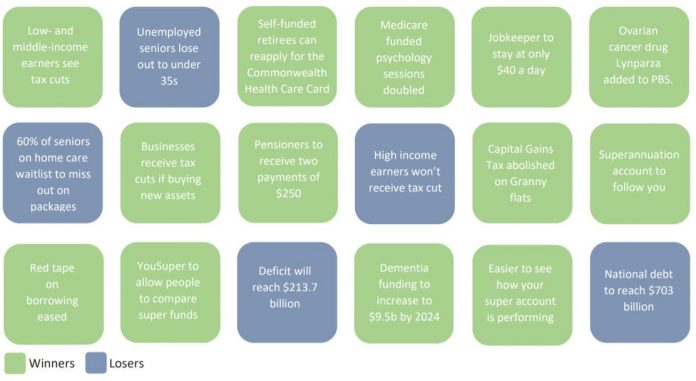 The Federal Budget was released on Tuesday 6 October 2020 and we take a look at the benefits and disadvantages for Australian seniors.

There’s good news for pensioners who will receive two payments of $250, the first in December, then again in March 2021.

The budget also includes 23,000 more home care packages to help keep seniors ageing in place in their homes: 2000 of those for level four care, the highest level. And there’ll be more funding for training aged care staff.

Dementia patients will also win, as support funding will increase from $4 million to $9.5 million by 2024.

Self funded retirees can reapply for the Commonwealth Health Care Card, and Capital Gains Tax will be abolished on granny flats, provided there’s legal documentation to protect the resident.

In health, ovarian cancer drug Lynparza to be added to the PBS, and mental health will see a win with the doubling of Medicare funded psychology sessions, from 10 to 20 per year. Lifeline, Headspace, Beyond Blue and Kids Helpline will see a funding boost.

Red tape will ease for borrowing money, and banks will no longer be able to scour through Netflix and Uber bills, meaning the cost and time needed to get a loan will decrease.

Businesses will receive a tax cut if buying new assets, and superannuation will see a change: workers will no longer get new superannuation accounts automatically, so your super ‘follows you’ if changing jobs. Yousuper will allow people to compare super funds and see how their super is performing.

Unemployed seniors may lose out, as Jobmaker payments give employers more incentive to hire staff under 35 and those on centrelink will be disappointed, as Jobkeeper payments will stay the same at $40 a day.

While the 23,000 more home care packages will help seniors, it’s only enough to help 40 per cent of the 60,000 currently on the waitlist for this service, potentially forcing people into retirement facilities.