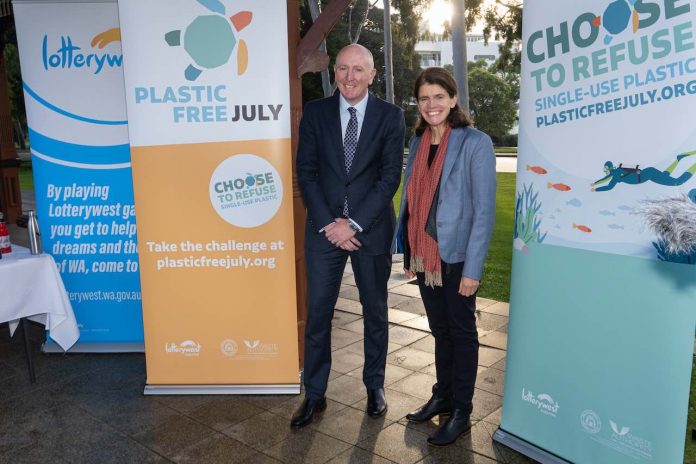 The Plastic Free July challenge is calling on Australians to choose to refuse single-use plastic in a bid to exceed last year’s record and avoid more than a billion kilos of plastic waste worldwide.

The Plastic Free July challenge helps millions of people take small, daily actions and is proven to significantly avoid landfill waste and lower the risk of plastic polluting the environment.

Last year, the challenge reduced each participant’s household waste and recycling by an average of five per cent (23kg) – already achieving half the Australians government’s target of reducing 10 per cent of the total waste generated by every Australian by 2030.

Given the use of some single-use plastic for many takeaway items has increased over the past few months during the COVID-19 pandemic, there is a heightened sense of urgency to reinstate the positive progress made in reducing plastic waste and pollution.

Founder of the Plastic Free July challenge Rebecca Prince-Ruiz and one of the world’s leading plastic waste experts, explains why she believes the challenge can achieve record waste avoidance this year.

“Every year this challenge has grown exponentially, having started with only 40 colleagues in Perth to over 250 million global participants. This year the challenge feels more poignant than ever as we begin to realise how intrinsically our social and physical environment is tied to the fundamental wellbeing of our communities. We have also seen the power of collective action firsthand. Whilst Plastic Free July is a personal challenge, participants are part of a global effort to create cleaner streets, oceans, and a cleaner, healthier planet. We can all be part of the solution.”

The Plastic Free July Challenge seeks to address the most critical solution to plastic pollution – waste avoidance. Reducing waste and recycling is significantly more energy efficient than piling up landfill or trying to extract plastic waste from the environment.

“Plastic Free July isn’t about drastic lifestyle change; it’s about being more conscious of the single-use plastics that you use day-to-day and taking small but smart steps to reduce them. Simple swaps could include switching to bar soap or avoiding plastic when you buy your vegetables. The majority of challenge participants started by choosing to refuse at least one single-use plastic but nine out of 10 ended up creating long-term habits that lasted far beyond the challenge itself,” said Rebecca Prince-Ruiz.

The campaign also supports businesses to move away from the concept of ‘take, make and throw away’, towards a circular economy that promotes recycling and the re-use of materials.

The campaign was a finalist of Banksia Sustainability Award, recognised for its contribution to the United Nations’ global sustainability goals to protect the planet.

To sign up to be part of the Plastic Free July movement and learn more, visit www.plasticfreejuly.org

A lifetime of sport and laughter for Gwyn White

Elder abuse can occur – tackling threats and violence in aged...