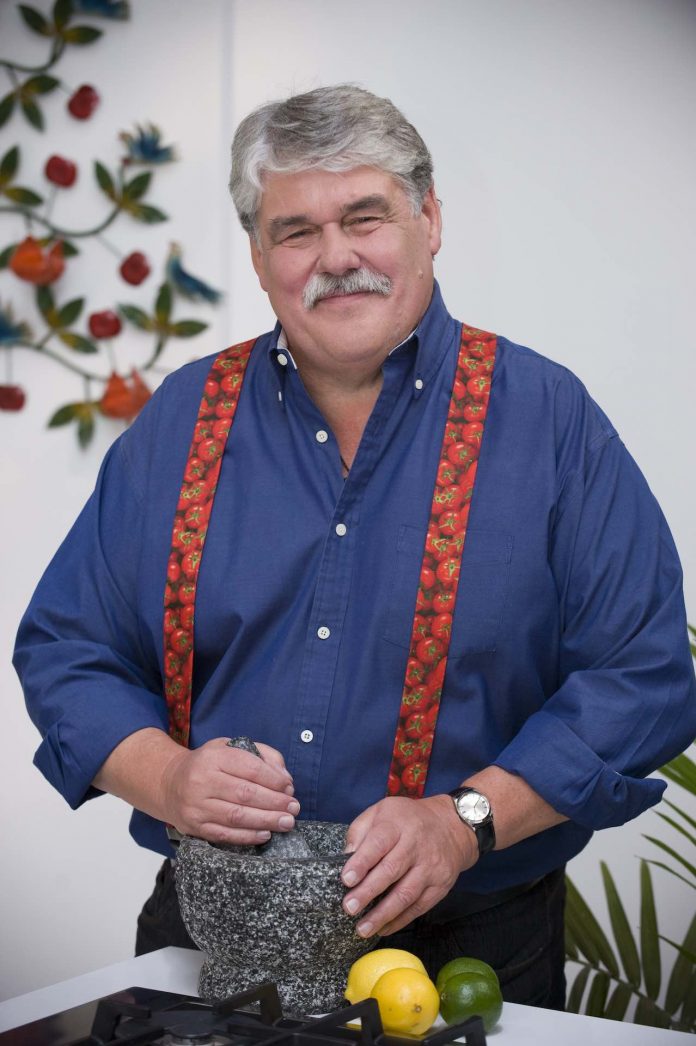 With Huey, the proof’s in the cooking.

“I like simple stuff,” says the busy man who has no mobile phone, no driver’s licence and no need to use a computer.

Turning 72 this year, Huey doesn’t bust a gut with physical activities and is somewhat grounded with arthritis which crippled a knee that has been unsolved by an operation.

“My specialist gives me non-invasive treatment for my knees and hands and that’s fantastic but one day he asked me how my neck was, which was fine. But I started to get pain in my neck the next bloody day, so I told him not to ask again,” he laughs.

Before he left New Zealand as a young man, Huey was a promising guitarist with his band Sebastian’s Floral Array which made front-page news, winning Battle of the Bands.

“A second headline said: ‘Band Throws Flowers to Audience’ and down the bottom of the front page was another story. The heading was : ‘Police Baffled by Raids on Botanical Gardens,’” laughed Huey.

“Nooo! It wasn’t us. Definitely not,” roared Huey unconvincingly down the phone from his Melbourne home.

Life seems a breeze for Huey. All his challenges – television, radio and print deadlines – are mere Huey hurdles that can be cleared. And he doesn’t need gadgets.

“There’s always someone with a phone or a car and I have always used taxis and now Uber. I like trains, especially country trains or I fly somewhere,” he said.

Huey’s latest hurdles are his memoirs (waiting to be typed) and his popular YouTube show Huey’s Fabulous Fast Food for One (or Two) which he constantly updates with recipes. “My daughter, Charlotte, helps with the computer,” he says.

Wife Ruth, also an accomplished musician, does most of their home-cooking and Charlotte is a champion at pastry cooking.

Huey, who’s criss-crossed the globe during his 25 continuous years on television, points to a San Francisco eatery which is a hit serving simple food.

“People looking at the food just saw something with tomato and olive oil with a bit of salt. But they tasted the best olive oil, the tastiest tomato and the best sea salt. They realised how good simple food is,” said the chef.

Huey laughs-off most things including his see-sawing weight.

“I have to watch it. I always have. I’ve always loved food,” said the former owner of eateries at the cutting edge. The list includes Clichy, Fleurie, Champagne Charlie’s, The Last Aussie Fishcaf and Memories of the Mediterranean.

Top critic Stephen Downes described Huey as the most important Melbourne restaurateur of the eighties.

Never Trust a Skinny Cook was shown in 100 countries.

“To tell the truth, I’m over television – especially the machinations behind the scenes. I watch television now and I think that’s okay when you are learning something.

“In the early days I used to watch Burke’s Backyard and I’d feel I’d learnt something – that I could go away and do that. Until next day and think, ‘sure I could do that. I’ve got 10 brown thumbs,” he laughed.

Huey handwrites everything including his book manuscripts. He has sold more than 200,000 books. His memoirs are close to finish and he has a publisher in hand. He might be joking when he says it’ll be called Who Called the Cook a Bastard?

“I don’t feel my age. I think keeping active is the key. We can’t always keep physically active but we can do gardening or read. We should keep the mind active.”

“I remember how happy my father was in the garden and when he couldn’t continue he was always out having a wonderful time. He enjoyed the simple things. He was happy till the day he died.”

Huey is clearly carrying-on with tradition.

PS. Huey, who has never driven, keeps a vintage Mustang in the garage, occasionally driven by a friend. Huey sits in the passenger seat.

Say farewell to Escape from Pompeii at the exclusive Arrivederci –...