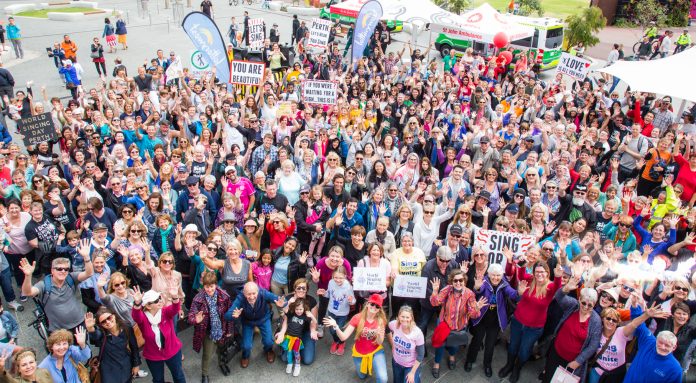 A giant sing-along will be held in Perth City for World Singing Day on Saturday 19 October 2019, when people will gather in cities around the globe for the biggest sing-along the world has ever seen.

The sing-along will be held in Yagan Square, with lyrics to well-known songs displayed on the 360-degree digital tower screen. People of all ages and backgrounds – from shower singers to celebrities are invited to take part.

“The day will be like a large karaoke sing-along, with singing groups placed throughout the crowd helping lift the overall atmosphere,” says World Singing Day Australia Coordinator, Sue Ross.

Founded in 2012 by USA musician, Scott Johnson, World Singing Day is an annual global sing-along, held on the third Saturday in October, using the power of song to unite people and communities around the world. The movement has grown, with around 200 cities taking part last year.

Perth based choir director, Sue Ross held the first Perth city sing-along last year attracting a crowd of around 800 people and says it is set to become an annual event on the Perth calendar.

Free community singing workshops ‘Shoe-BeeDoo’ are being held in the 6 weeks leading up to World Singing Day, where participants can rehearse songs that will be sung at the Yagan Square event.  The workshops are running Saturdays, from 12:30pm to 1:30pm at Yagan Square amphitheatre and are open to anyone who wants to join in.

“Singing is all about having fun and allowing yourself permission to sing, no matter what you sound like. Singing in a group boosts confidence and makes new connections in communities,” says Sue.

Researchers have found that when people sing together, they not only harmonise their voices, they also harmonise their heartbeats, helping people break down social barriers and form bonds quicker than anything else.

Registration and details of global events can be found at  www.worldsingingday.org

Loads of acts and entertainment at this year’s free Coogee Live...