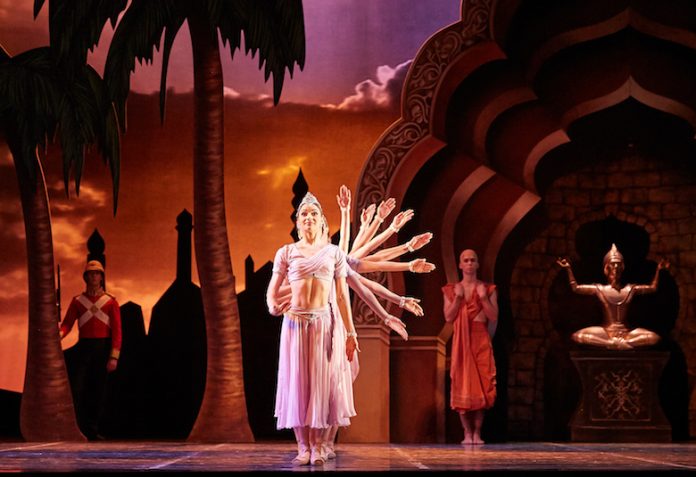 La Bayadérefirst premiered in St Petersburg in 1877 and captured the imagination of audiences quickly becoming a revered Russian classic but never making a debut outside of the country.

Audiences at the time were intrigued not only with the highly technical dance sequences but also with its setting in the far east of India.

La Bayadéretranslates to the temple dancer and the story is set in 1855 when the British East India company was at war with armies of Cooch Behar.

The English and Indian leaders decide to arrange a marriage between the Maharaja’s son Prince Solar to the English Governor General’s daughter Edith to help bring an end to hostilities.

Told over three-acts this passionate and tragic story of the Indian Prince Solor who is instructed to marry the spoilt English girl Edith. Unfortunately, Prince Solor is deeply in love with temple dancer Nikiya and is devastated by his father’s instructions.

The tragic story unfolds through magnificent sets and scenes with a large cast of dancers.

La Bayadére was lost to the world until 1961 when the Kirov Ballet presented an adaptation of the second act in Paris starring 23-year-old Rudolph Nureyev.

It took another 20 years until Nureyev staged a full-length version of the ballet in 1992 to the Paris Opera.

Since then the ballet has gained a place in the world’s major ballet company’s repertoires and for the first time comes to His Majesty’s Theatre with a passionate presentation from WA Ballet.

Following on with from WA Ballet’s partnership with Queensland Ballet for last year’s season of Dracula, this production also includes a co-production with the Royal Winnipeg Ballet.

La Bayadéreis choreographed by Queensland Ballet’s Greg Horsman, set and costumes designed by Gary Harris and musical arrangement by Nigel Gaynor; a combination of talents which has produced a breathtaking ballet.

Add in the talents of the Western Australian Symphony Orchestra conducted by Judith Yan, I felt I could have been in Paris, London or New York with the quality of the production.

The dancing in La Bayadéreis the most precise and technically correct I have seen from the company.

I must mention the absolutely stunning performance by newcomer Dayana Hardy Acuna who played Nikiya; her grace on stage was breathtaking.

I was told that principal ballet mistress and artistic associate Sandy Delasalle had worked closely with the dancers to improve their formation dancing.

The production has many scenes with a full ensemble of dancers and Delaselle’s training was certainly reflected in beautiful formation dancing.

It’s a story of love, loss and betrayal with stunning costumes, amazing technique from the entire cast and a beautiful score. A production not to be missed – bravo to WA Ballet!

La Bayadére plays at His Majesty’s Theatre in Perth until 25 May 2019.