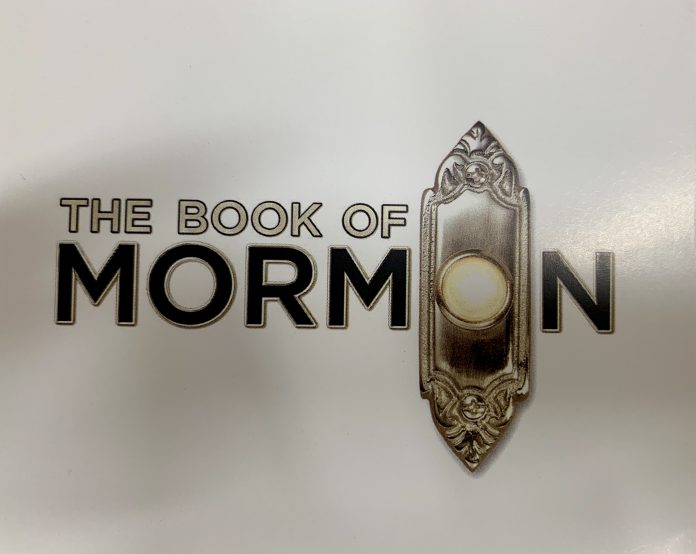 It was so popular in London that when my daughter and I had tried to buy tickets to see it about five years ago they held a daily lottery and we couldn’t jag one, so we waited out five years and it finally came to Perth…

The musical is written by the same people who write the cartoon South Park so be prepared for something controversial.

It definitely requires warning because not everyone enjoys this kind of humour and there is quite a lot of swearing as well.

The writers must have stumbled upon How to Write a Musical 101 because the songs and format are incredibly clever and professional as were the sets and the Perth cast.

Without spoiling the whole story, it opens at Mormon school in the USA with a group of elders finishing their training. Part of their commitment is to be sent out to door knock to ‘spread the word’, hence the ding dong and Hello themes in the musical’s publicity.

The cast can belt out a great song and the whole show reeks of that ‘no one can do a musical as good as the Americans’ but there is a deep parody underlying the initial seemingly benign story.

The lead pair, a fat boy who isn’t quite sure why he has become a Mormon, and an over achieving perfect boy, are both sent as an elder team to Africa to spread the word.

The perfect boy is certainly not happy about the pairing showing the true colours of his personality.

They arrive in a village and cannot seem to convert any people to the religion.

The villagers have a variety of issues with poverty the least of their problems and the only way the Mormons get through to them is when the fat boy adjusts the Mormon manifesto to suit the villages hopes and dreams.

It’s an incredibly clever script, has brilliant songs and dancing but is completely politically incorrect.

On opening night there were a few walk outs at half time, a couple of very well-known Perthonalities but I can’t say who…

After talking to several people who had seen it in Melbourne apparently that is a common occurrence with people feeling offended but don’t do that and miss the second half because that was where the show really hits its strides.

So if you love musicals, are not easily offended by swearing or politically incorrect humour that mocks organised religion than you will laugh until you cry.

The Book Of Mormon plays Crown Theatre until November 2019.