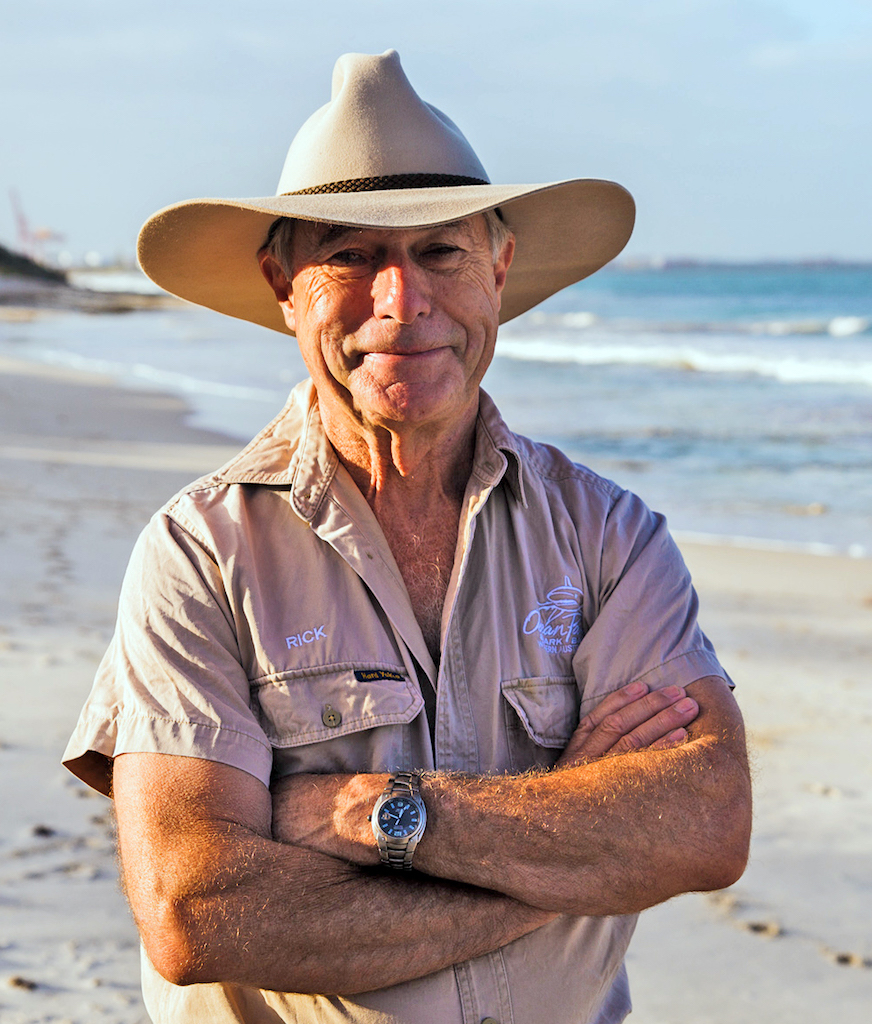 RICK Fenny, star of Channel 7’s Desert Vet, enjoys a life resembling a desert creature thriving on all the challenges, mishaps and adventures that nature can throw at him.

Nearly seventy adventurous years in the making, including 46 years honing his veterinarian know-how, Rick Fenny is an ideal media subject – in front of and behind the camera.

Then there are his other businesses: Carbla station, near Shark Bay, his Albany luxury retreat Maitraya and his Ocean Park Aquarium. He acquired all three in one year.

“I’m always on the brink of bankruptcy,” he told me from his Mosman Park home before setting off on another round of visits to his far-flung businesses.

“Of all the things I’ve done, the most rewarding is helping to raise seven children to adulthood,” says the father and grandfather.

Rick’s beat is possibly the biggest in the world. And as if all of Western Australia isn’t enough, Rick has expanded his vet outlets interstate and even to Britain and France.

The world is the man’s oyster. In later years, though, Rick has slightly reined-in his interests, totally focusing on the state he passionately loves.

“Why do people go off to Bali because they think they can have a cheaper holiday. It bemuses me. What’s cheaper than driving off in your car with a tank of fuel and a swag or staying in a caravan park?

“All Australians should see what an amazing place we have: Karijini, Shark Bay, Ningaloo, Karratha and Roebourne regions.

Rick’s ventures have the support of his wife Christine who travels her own roads.

“She likes to collect rocks and shells and things,” he laughs.

Ed, the fifth of their seven children, runs Ocean Park, a fish farm he transformed into an aquarium promoting conservation and education. He then opened 4WD World Heritage area tours and day trips to Dirk Hartog island.

At 28, Rick set up his first vet’s practice in Karratha after having to go to Queensland to further his education.

In 1967, WA had no veterinary degree although the state did pay for Rick’s degree. In return, Rick was bonded to work for the WA Government for five years.

“I became the government vet in Derby. That set me up for life,” he says, with a working life travelling to outback stations and driving at the end of every season to Perth.

Rick was best-known for his links with four-legged friend, Red Dog, the kelpie who wandered the Pilbara in the 1970s, being immortalised in a couple of blockbuster movies.

And when Red Dog’s time came, it was Rick who put the dog down.

Rick is always one for new horizons. From vet clinics to tourism businesses and satellite management, while steering his kids, Rick now sees the media as his latest challenge.

While a film crew was documenting Rick’s luxury resort – whose star guest was Lady Gaga – for the series Unreal Estate, Rick was told his own adventures would make the perfect film subject.

A film crew accompanied Rick all over the state, forming a partnership with Rick and the result is Desert Vet.

“I’d like to take it further – more of a documentary, perhaps for the ABC,” says Rick, whose specialty is tackling new ground.

Rick says that anyone facing retirement should not forget that just like the body, the human mind is best when regularly exercised. Or, in his case, challenged.

Rick is proud of his heritage. Both sides of his mother’s family, the Mundays and the Gardiners, came out as pensioner guards in the 1850s.

Rick is hoping to pass on his skills and knowledge to the next generations.

The explosion of new veterinary technology has been good and bad, Rick says.

“Good for the health of animals but not so good for young vets who rely on the technology and don’t develop their skills,” he said.

“It’s taken away a lot of the spontaneity of veterinary practice. We maintain that in our practices,” he said.

Planning like a military commander, Rick sets a comprehensive month-by-month program. He incorporates a territory including Perth, Albany, the Pilbara, Kimberley and further north, leaving a trail of recovering animals in his wake.

They’re all part of his breathtaking beat. For now. The 69-year-old says he’s keeping an eye open for new opportunities.

Desert Vet will be shown on Qantas flights from April and plans for a six-episode series focussing on six regions of WA are underway.

Lights, camera and a focus on positive ageing