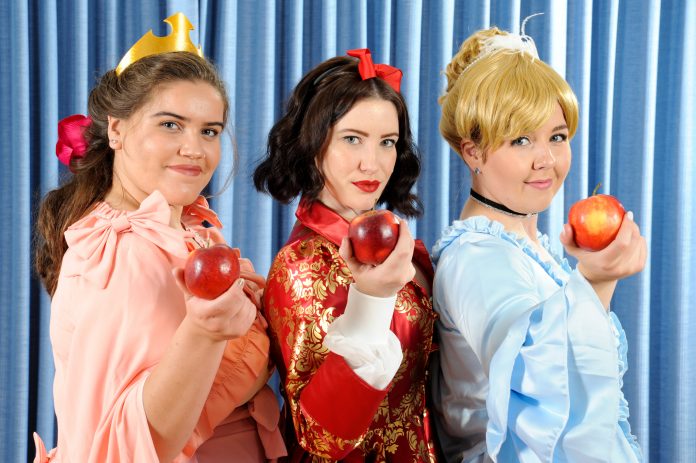 Following multiple sold out seasons across America and around the world, Grey Lantern Productions is thrilled to present the PERTH premiere of the hilarious hit musical DISENCHANTED at the Subiaco Arts Centre, 10-19 October.

Forget the princesses you think you know, DISENCHANTED turns the clichéd storybook princesses on their heads when they toss off their tiaras to present a comically subversive, not-for-kids musical that cleverly reveals what really happened ‘ever after’ for the royal renegades.  DISENCHANTED has been described by the New York Times as “…the show that feels like a girls’-night-out retro rebellion for the suburban oppressed”.

Gone are the poisoned apples and glass slippers when Snow White and her posse of disenchanted princesses sing numbers such as “All I Wanna Do Is Eat’, “Without The Guy”, “Big Tits” and “Secondary Princess”. These sassy princesses present their musical revue through 10 storybook heroines who rail against animated pop culture portrayals of themselves as ditzy damsels in distress, perfectly portioned, western, heterosexual stereotypes of femininity.

Armed with lovable on-stage larrikinism DISENCHANTED is pure entertainment but isn’t afraid to push aside the stereotypes we’ve grown up with. DISENCHANTED shakes up the world of fairytales so it will never be the same!

“DISENCHANTED is a sassy, fun-filled feminist romp that I am delighted to bring to Perth. Grey Lantern has a strong track record of producing awesome, fun and feminist shows that presents messages in an accessible manner, and this is no exception. I am beyond proud of my sassy cast of queens, and can’t wait to share DIS with Perth audiences!” – Lorna Mackie, Director.

*** This show is not suitable for those with a penchant for poisoned apples, happily ever after or anyone under the age of 15