The latest exhibition in the WA Now series at the Art Gallery of WA, Breathing Pattern, showcases new and recent work by Western Australian artist Eveline Kotai, including canvas reconstructions and painting.

Over the past 15 years, Eveline Kotai’s interest in material dissolution and regeneration has culminated in the practice and process of cutting up and reworking her own paintings into new works.

Eveline Kotai was born in 1950 and lives in Fremantle, Western Australia. She is a member of the Art Collective WA.

While Eveline has used a variety of media during the course of her 40-year art practice, over the past 16 years she has concentrated on the theme of material dissolution and regeneration. Recent exhibitions Infinite Threads (2012), Subdivision (2014) and Writing on Air (2015) all draw their titles from the artist’s symbolic and material interpretation of the nature of change.

Eveline’s unique technique of cutting up and reworking paintings into new compositions echoes a world in constant transition. Not only do her methods provide a constant source for new beginnings, but the action of cutting and stitching canvasses have become an important meditative practice that is reflected in her final pieces. Works that may previously have been representational are sequentially dismantled so that the remodelled ‘palette’ becomes the impetus for new directions.

Inherent in the synergies that unfurl are further iterations of nature itself. The complex combinations of tone, colour and surface merge into harmonies that are reminiscent of life’s underlying cycles – sensed but not easily recognised. Eveline’s work offers a space for contemplation that distills her ongoing inquiry into the correlations between art, life and nature.

Dunja Rmandić, AGWA Associate Curator of 21st Century Arts, said, “Eveline’s practice is mesmerising—while one can understand the process, seeing the works in front of you opens up another dimension of experience and perception, of presence and being present.”

Eveline Kotai’s unique technique of reconfiguring pre-existing works into new compositions via invisible thread, and onto new surfaces, echoes a world in perpetual motion, transition and continuation. Like a computer program trying to repair itself or a human mind trying to get to know itself, new paths are found, new solutions forged. This method provides Kotai with, not only a never-ending source of new beginnings, but also an important meditative practice, a kind of breathing pattern, through the action of cutting and stitching her canvasses anew.

WA Now – Eveline Kotai: Breathing Pattern is on display from 19 August 2019 to 20 January 2020. This free exhibition forms part of the WA Now series dedicated to showcasing work by practising WA artists. To complement the exhibition, AGWA is hosting a series of events including a free artist talk on Saturday 14 September. 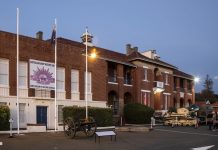 Perth has a wealth of museums to share with children… here’s a handy guide!