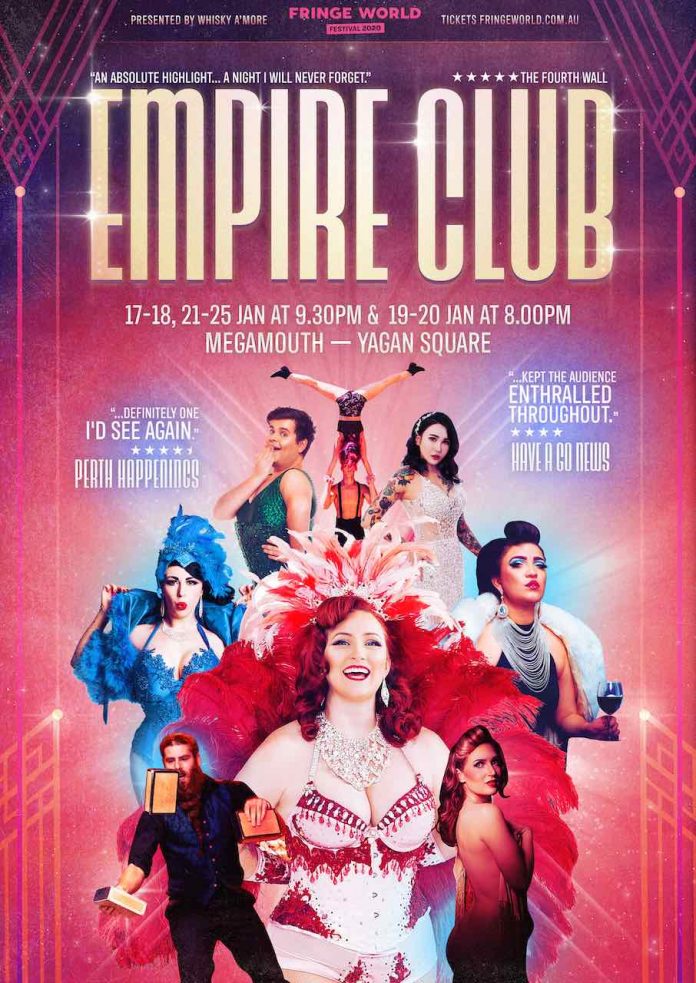 There is no better way to start 2020 then by attending one of the many Fringe World Shows – Perth comes alive with this amazing festival.

I had the opportunity to throwback to a 1920s speakeasy when I attended the hedonistic and tantalising burlesque Empire Club variety cabaret show this week.

I love Fringe shows as people seem to get more involved and as we waited for the sold out performance to start I could feel the anticipation from the audience.

Host of the Empire Club, the sultry and scintillating Tash York, kept the audience in stitches from the moment she stepped on stage in sky-high heels with her quick wit and amazing voice.

I loved the award winning burlesque girls who graced the stage including LuLu Liqueur who dazzled the audience in red to Chloe the Cocaine with her Chinese inspired routine.

Contortionist Taylor Jones shows off a back-bending act with a smile on her face the whole time making it look effortless which had the audience cheering. Smokey La Bare certainly knows how to tame the flame with her fiery performance which had all of us on the edge of our seats.

Logy on Fire showed off his vaudevillian style circus tricks involving cigar boxes which had us laughing throughout. Producer of Empire Club Whisky A’More showed off a poignant and ethereal burlesque performance which wowed everyone.

Closing the show was the hilarious boylesque artist Trigger Happy who you might know from America’s Got Talent where he hit his own Golden Buzzer.

Whisky A’More has a knack for curating a seductive and scintillating lineup giving us a taster of what Fringe has to offer. No two acts in Empire Club are the same and include an award winning lineup from burlesque to circus and everything in between.

It was a great start to Fringe World in Perth – pop this on your list of shows to see – it’s a highlight of Fringe cabaret.