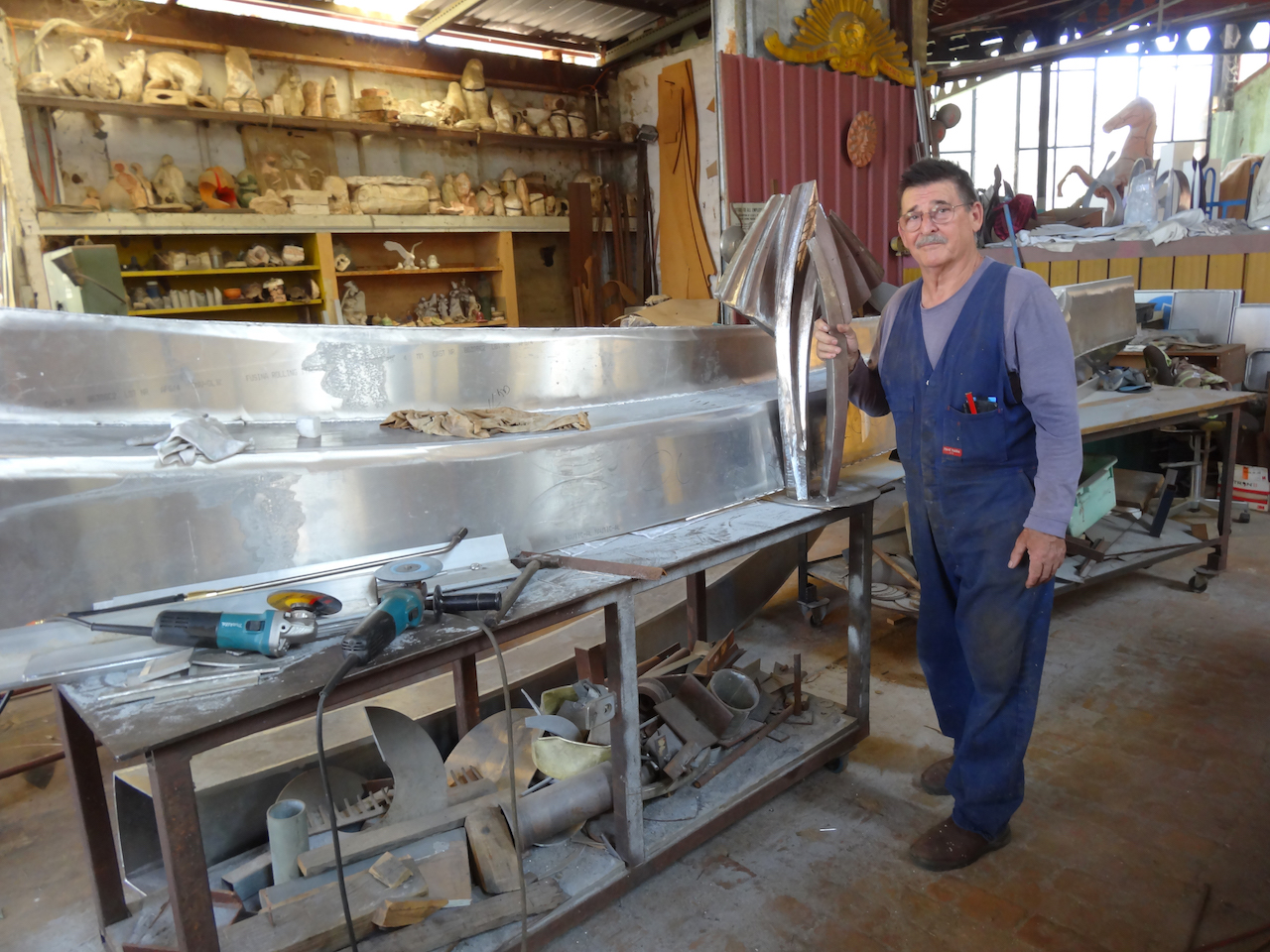 SCULPTOR Ron Gomboc is busy inside his studio-workshop in Middle Swan preparing his latest work for Cottesloe’s Sculpture by the Sea  exhibition next month. The impressive 5.5 metre work entitled The
Elder reflects his vision of Australia’s indigenous people caring for their younger generation.

In many ways, the work is also a reflection of Gomboc’s lifelong work as a celebrated sculptor, who recently turned 70 with no signs of slowing down. He is the only Australian sculptor to take part in every Cottesloe Sculpture by the Sea exhibition since it began.

Wandering into his studio, which adjoins the gallery, is a look into a busy artistic life. Gomboc shows the beautifully crafted gold-plated bronze on tiger iron stone base statuettes commissioned over the past few years by the Australian film industry for the Australian Academy of Cinema Television Arts awards. There are casts of horses heads from 1995 when Gomboc was commissioned to create two 350 cm mirror image bronze horses for the Sultan of Brunei and a big array of other material accumulated down the years.

Gomboc’s works are on show throughout the country. For someone born in Slovenia he has a deep empathy for Australia where he settled with his family aged 13.

The Guardian (2009), sits outside the Royal Flying Doctor headquarters in Broken Hill. The towering cyclone proof 12 metre high work Northern Spirits (2009) was commissioned by Fortescue Metal Group in South Hedland in memory of three people who perished in a cyclone.

Among his many awards is the 2003 Centenary of Federation medal for outstanding commitment to the community in raising the awareness of art. In 2007 he received the Australian Defence medal.

Last year was a busy one after a Chinese cultural delegation visited Perth and were impressed with Gomboc’s Sculpture by the Sea work at Cottesloe and the gallery sculpture park. He was invited as the only Australian representative to China to the fourth Silk Road International Arts Festival in Xian attended by artists from 103 countries. His sculpture is now represented in the Xian National Gallery Museum collection.

Later, as the only Australian artist, he was invited to take part in the International Contemporary Art Exhibition in Songyang.

“It was an enormous honour for me to see the Australian flag flying at the Songyang Art Gallery’s official opening where my work was also acquired for their collection. Everything in China is done with a great deal of respect for history and culture. Both events were wholly  funded by the Chinese Ministry of Culture, a big promotion to the world of China’s cultural awareness.”

After China, Gomboc prepared for his 18th Sculpture by the Sea exhibition in Bondi last October with his work Edifice, Edify  and for the Cottesloe exhibition. This year he is already working on two small private commissions and will also possibly take part in an international sculpture symposium.

Gomboc  also has a strong commitment to help younger artists. To further promote sculpture, he and wife Terrie have funded and presented an annual sculpture survey exhibition since 1984, encouraging students from tertiary institutions to take part and promote cultural exchange with international and national artists.

Another busy year ahead for this talented and innovative sculptor whose passion for his work still burns bright.

Perth set to ‘Dance for a Cure’ to help fight Childhood...